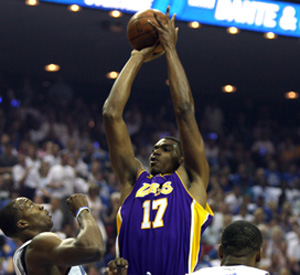 As the first week of the season draws to a close, the reigning NBA Champions wrap up a three-game homestand with two wins and one loss. The Lakers organization received their title rings in the presence of former team greats like Magic Johnson and Jerry West before the opener hosting the Clippers Oct. 27.

Kobe Bryant put up 33 points, Andrew Bynum 26 points and 13 rebounds and Lamar Odom 16 points and 13 rebounds, while new team member Ron Artest brought a distinct difference on defense. The Clippers’ No. 1 draft pick, forward Blake Griffin, did not play due to a stress fracture of his left patella suffered during the team’s last preseason game Oct. 23. Although starting forward Pau Gasol was out with a hamstring injury, the Lakers went on to beat the Clippers 99-92.

Gasol’s absence was definitely felt Friday night at Staples against the 2-1 Mavericks. Dallas led the entire game up to their 94-80 win, as the Lakers failed to keep up with Dirk Nowitzki (21 points), Shawn Marion (18 points) and Jason Kidd (11 assists).

Sunday against the Hawks (2-1), the Lakers’ defense picked up the pace, forcing 20 turnovers by the Atlanta team. Bryant led all scorers with 41 points, eight rebounds and five steals in his 37 minutes of play, while Bynum had a solid 21 points. The Lakers won 118-110.

The Lakers face the 2-1 Rockets in Houston Wednesday for the first time since the Western Conference Finals – and since Artest became a Laker. Then, they return home to host the 1-2 Grizzlies Friday and 1-2 Hornets Sunday.

The Clippers travel north to play 0-2 Golden State Friday, then come back to Staples to battle the Grizzlies Saturday and the Hornets Monday.