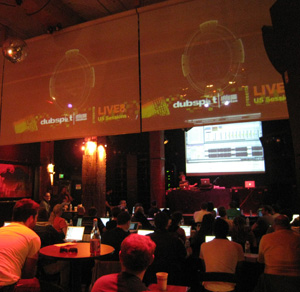 Dubspot, the New York City-based electronic music production and DJ school, has developed quite the following around their West Village home. Now, they’re spreading their gospel in Los Angeles as part of their Live 8 U.S. Sessions Tour this Saturday and Sunday, Nov. 7-8, at King King in Hollywood.

The Tour offers a rare chance to hear the electronic music doctrine preached by world-class DJs, composers and producers. Each day includes five interactive workshops, open panel discussions and live performances. Sharing the stage on the Los Angeles stop are marquee names such as Scientist, Daedelus, Justin Boreta from Glitch Mob and Kid Beyond, as well as a pack of Dubspot instructors.

“There’s eight of us coming out from New York,” Dubspot founder, and former DJ, Dan Giove elaborates. “We’re coming out with a pretty big crew to provide the entire learning experience.”

Clinics will revolve around the use of Ableton Live 8, production and performance software that is popular with a wide variety of musicians.

“Ableton is an intense program that is powerful, and can be much easier than people make it to be,” says Giove. “That’s our strength. We are able to teach people how to use these programs efficiently.”

Victim of an evolving desire for new music, Giove opened the NYC Dubspot location so that he could produce his own electronic concertos.

“I wanted to learn how to make music quickly, and didn’t have any options. I couldn’t find that place,” explains Giove. “So I started holding some classes.”

Giove has already begun expansion plans in New York, and hopes to open a Los Angeles location by late 2010 or early 2011.

King King is located at 6555 Hollywood Blvd., Los Angeles. For more information, visit dubspot.com. If you’d like to get involved e-mail info@dubspot.com.