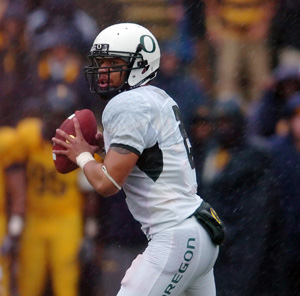 The Rose Garden is safe – for now. And that is not necessarily a good thing for the Pac-10.

In the southern shadows of the USC campus lays the ever-so-beautiful Rose Garden. Perhaps many students and even some players were planning on visiting the popular flower grounds in hopes of cutting a few roses in honor of representing the Pac-10 – and maybe the nation – at the Rose Bowl in a few months.

Of course, after what happened at the University of Oregon campus on Saturday, many of those students and players will probably have to change their plans. In fact, after what happened in Eugene on Halloween, the Trojans will spend the next year looking at roses as tricks instead of treats.

After all, not only did the Ducks’ 47-20 victory over USC just about kill any chances of a Trojan appearance in the national championship game, one more Oregon win in the next four weeks officially eliminates Southern Cal from claiming the Pac-10 title. That means the Trojans will have to make travel arrangements outside of the L.A. area if they want to play in a bowl game at the end of this season.

Now, many red roses at the Rose Garden may be spared – though in no way can this column vouch for the hoards of Ducks fans quacking their way to Portland’s Rose Quarter to pick at a few thorny stems. For their part, Oregon totally deserves to be celebrating right now, and Southern Cal did not exactly bring its “A-game” on Halloween, so no one should make any excuses for what happened up in Eugene.

The thing is, I suddenly feel like quoting a line from Spider-Man right now to tell Oregon this: “With great power comes great responsibility.” Now that Oregon has the inside track to win the Pac-10 and earn a berth in at least the Jan. 1 version of the Rose Bowl game, it behooves the Ducks to win their first Rose Bowl game since 1917. After all, the small Pacific Northwest school with the oddly designed green-and-yellow jerseys carries the reputation of all 10 schools representing the Pac-10 Conference – and the eyes of the nation will be intently watching.

Sure, Oregon has played lights out, and no one will say they did not deserve to be in the Rose Bowl if they win every game between now and Jan. 1. Likewise, the way USC played the last three weeks, they have demonstrated they do not deserve to play for a national championship this season.

Yet, with five Rose Bowl showings and one Orange Bowl appearance in the last six years, USC has almost single-handedly carried the reputation of the Pac-10 on its shoulders. Southern Cal has won 13 Rose Bowl games in the last 40 years, while only one other Pac-10 team has won the Granddaddy of Them All since 1990 (Washington, three wins).

Accordingly, what is the risk the Pac-10 faces by seeing one of its teams, not named USC, featured in the 2010 version of the Rose Bowl game? After all, while this thing called “East Coast Bias” allegedly fails to notice teams like Oregon and Arizona (currently second in Pac-10 and still playing for its first-ever Rose Bowl appearance), are the Ducks ready to accept the responsibility of stepping into the limelight and representing the Pac-10 on a national stage?

It is a responsibility USC has handled so well in the past, especially during the Pete Carroll era. In fact, Carroll almost seems to love the limelight, and his handpicked players do not shy away from it, either. Heck, what else do you expect from a team who plays in a stadium where the Hollywood sign can be seen clearly from the press box on game days?

Now the Ducks are on the verge of accepting one of the biggest responsibilities in school history, and it is up to them to avoid repeating the fates of the 1920, 1958 and 1995 Rose Bowls and demonstrate there is more to the Pac-10 than just USC and nine filler schools. Simply put, Oregon needs to win its second Rose Bowl game ever – and first since 1917 – in order to silence those Right Coast critics and show everyone in the Eastern Time Zone we know how to play football in the Pac-10.