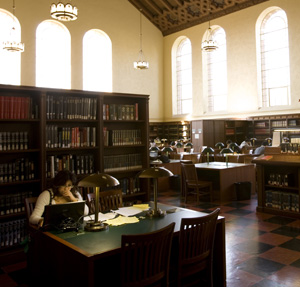 UCLA students might be less boisterous than Berkeley coeds, but budget cuts are affecting them, too.

On Sept. 24, 5,000 students and faculty members gathered at the historic Sproul Plaza at UC Berkeley. They held up signs with the words, “Save our University,” “Chop from the Top” and “Layoff Yudoff.” They were protesting against the $800 million budget cuts and the belt-tightening plans put in place by UC President Mark Yudoff.

Further south, hundreds of UCLA students and faculty were also protesting. Students at UCLA say they joined in on the walkout to show their “solidarity.”

“There was a walkout, but it was our first day of classes,” says Sabiha Khan, a junior political science major at UCLA. “I was surprised. I would have expected it to be bigger.”

Nevertheless, UCLA students have been mobilized around the issue, though they may not have had as many people join in on the protest as UC Berkeley.

The UC budget cuts have forced tuition increases that may be raised by 30 percent next year. They have forced a number of layoffs and created furlough days that make it a requirement for staff to take a certain number of days off without pay.

UCLA is riled up. The students’ anger is directed towards legislators in Sacramento who enacted the cuts, but more specifically toward Yudoff. Some are angry because they believe administrators are keeping their high salaries and cutting spending in other important areas.

UCLA students have felt a significant change this year from the cuts.

“I used to have free tutoring, and now I can’t,” says Michael Brenner, a third-year history major. “A lot of services on campus, like libraries being open late, have been cut.”

For instance, Powell Library on UCLA’s campus used to be open to students 24 hours a day. It was an integral part of the studying routines of students. During midterms and finals, students could stay all night long if they needed, according to Khan.

The budget cuts have forced a significant decrease in funding for the library. It was reported that it would have to start closing at 11 p.m. each day, which caused an uproar among students, Khan says.

Running the 24-hour library costs about $125,000 to maintain for the year. The UCLA student government, called USAC, has been trying to figure out how to bring back this necessary service.

Fortunately for the university, two private donors gave a combined $100,000 to the library. Then on Nov. 4, USAC decided to give the remaining funds needed to maintain the 24-hour library service from a surplus of student government funds.

The library was saved by outside forces. The same cannot be said for tuition increases and the furlough system.

Yudoff spoke at an Oct. 14 meeting of the Assembly of the Academic Senate to explain his job and try to appease the protestors.

“I view my job as to preserve, protect and defend the University of California in all of its unique features,” said Yudoff. “That includes the stunningly capable faculty, access for low-income students, research and medical care. Unfortunately I’m also charged with balancing the budget. That often forces some incredibly difficult decisions.”

Some of those difficult decisions are the layoffs and furlough days for faculty.

“It’s affecting faculty and staff the most,” says Khan. “[They are] really being hurt by it.”

At the meeting, Yudoff said that he urged faculty to get their voices heard by the state legislature because Yudoff needs “horsepower,” and the faculty can help with that.

Yudoff is going to meet with the UC Board of Regents this month to discuss a new budget for the universities. Students and faculty are hoping that the new budget addresses each of their issues. Both groups will be protesting when the meeting takes place.

The effects of past and future protests are still unknown, but students and faculty are hoping they bring about some change for the better. Plus, there might be some relief from the government.

The House voted in September to increase student aid and Pell Grants, signifying that there might be a continuing trend to help the public school system and college students everywhere. President Obama has also previously promised to address the issue of the affordability of college. However, the issue, more than likely, won’t be resolved in the near future.

UCLA and the other UC schools are going to continue to be hurt by the cuts, and they will continue to be an issue for the everyday Bruin. But UCLA students aren’t going to sit quietly. Though UCLA might be less vocal than UC Berkeley, they are definitely fired up and ready to protest the current state of affairs.