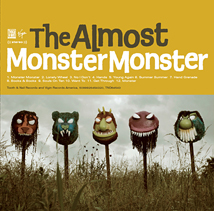 The sunny, swampy state of Florida has been the home of some morbid musical phenomena, like Marilyn Manson or death metal. There seems to be a death-obsessed edge about the place. But then there are more positive acts like Underoath, a metalcore band whose drummer and “clean” (as in “tuneful”) vocalist, Aaron Gillespie, has a side project called the Almost.

Gillespie’s clean-leaning is evident in the Almost’s second album, Monster Monster. When the opening manic chords to the song “Monster Monster” struck, I thought this could be good. It has a hardy fast pulse, and the guitar has a good buzzsaw sound to it. By the second song, however, I was already thinking about grocery lists.

The overall sound is melodic and earnest and has the aura of guys having fun in the garage, but it suffers from overproduction and lack of surprise.