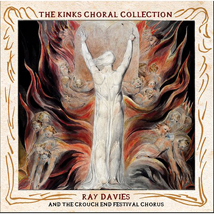 The trouble with this collection is that, as a recording, it hasn’t got the impact that it ought in a live setting – perhaps this is why Ray Davies is touring in the company of various choirs this month.

The concept of decades-old Kinks songs being backed by the 65-piece Crouch End Festival Chorus doesn’t seem so much an instance of 65-year-old Davies milking his career highlights when you’re watching the lot of them do a phenomenal job of “Shangri-La” on Electric Proms, as was the case in 2007. On record, though, the effect isn’t mind-blowing, but watered-down, with “Celluloid Heroes” sounding like a dated cliché about fame, and “Do You Remember Walter?” trotting along like a piece from a Henry Mancini record that could be caught in any vinyl clearance bin.

At times, Davies sounds like a bored narrator (see: “Big Sky”), or rushes through as though he’s as embarrassed to be revisiting as the listener ought to be in receiving (see: “All Day and All of the Night”). The biggest shame of all, though, is that this project could have seen a great reworking of “Phenomenal Cat” but omitted it in favor of excessive nostalgia, which seems somehow fitting.