Kings Are Boasting, Ducks Are Roasting 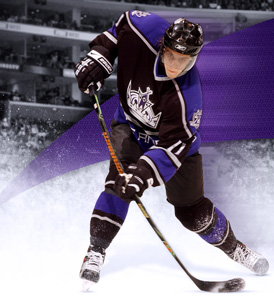 No matter how you dice it up, the 2009 version of the Los Angeles Kings are on a tear. All you have to do is ask Sid the Kid and the rest of the Pittsburgh Penguins.

The last time the Kings (10-5-2, 22 points) went at least eight games without an outright loss was in 2000, when most of the team’s roster was probably graduating from grade school. Yet, prior to Saturday’s 3-1 home loss to Nashville, the Kings skated to at least one point in every game played since Oct. 19, with wins over the defending Stanley Cup champions as well as worthy adversaries in Columbus and Dallas.

In fact, the only blemishes for the Kings since Oct. 19 were shootout losses to Vancouver and San Jose and the regulation loss to Nashville.

So, what has been working for the Kings? Two things: Anze Kopitar and penalty killing.

During the streak, Kopitar has been lights-out with nine goals and six assists and currently leads the league in scoring with 27 points. He already has more goals in the first 17 games (13) than he did at the All-Star break last season (12).

Meanwhile, the Kings have killed 27 penalties (out of 31 chances) since Oct. 19, more than another team in the league.

With one streak coming to an end on Saturday, the Kings look to start a new one during their current five-game road trip, which includes stops in Chicago, North Carolina, Atlanta and Florida.

A few miles south of Staples Center, the Anaheim Ducks are struggling to get anything going this season, taking residence in the Pacific Division’s basement with a 6-7-2 record – though they did defeat Nashville and Phoenix in consecutive games. However, the Ducks are in the midst of an excruciating road trip this week, with a four-game itinerary taking them through New Jersey, Columbus, Detroit and Pittsburgh.