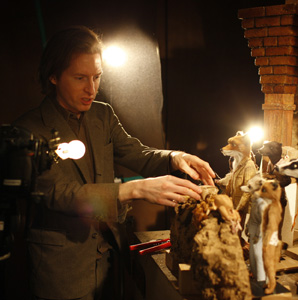 Wes Anderson is a man with undeniable style, a very specific style. But isn’t that the sign of a true auteur?

Walking into the SLS Hotel in Beverly Hills, Anderson, looking every inch the effortless hipster half of Silver Lake wishes they could be, carries a heavy duty metal suitcase, wrapped in tape that screams “Caution: Fragile” in big red letters. Inside, carefully swaddled in black foam, are Mr. Fox, Mrs. Fox and Ash, the three stars of Fantastic Mr. Fox, Anderson’s outstanding adaptation of Roald Dahl’s beloved story. Each doll, standing between one and two feet, is so vibrantly realized; you half expect the voices of George Clooney (Mr. Fox), Meryl Streep (Mrs. Felicity Fox) or Jason Schwartzman (Ash) to pour out of them.

After making a name for himself with off-center classics like Rushmore and The Royal Tenenbaums, Anderson is tackling animation for the first time.

Rather than falling back on the ubiquitous use of computers, Anderson decided to turn to stop-motion, a technique largely abandoned, though, after watching his use of it audiences will be wondering why. He approached Dahl’s widow, Felicity, and convinced her that he was the right man to finally adapt a story many had wanted to before.

Felicity was so won over by Anderson’s passion, he was invited to move into the Dahl family’s Gipsy House estate in Great Missenden, England. There, he wrote the script along with Noah Baumbach, his partner on The Life Aquatic with Steve Zissou, walked Dahl’s gardens, absorbed Dahl’s life and even had photos taken of all the home’s furnishings so that miniature versions could be replicated and used in the film.

“My goal was to make it as Dahl as possible,” Anderson, dressed in an olive green version of Mr. Fox’s corduroy jacket, begins.

But the film is unmistakably his directorial style, something he’s flustered to hear.

“The last movie I did [The Darjeeling Limited], people said, ‘I can see this is a lot like your other movies,’ and I thought, ‘But we’ve gone to India, we’re on a train, it’s totally different!’ I have a way of thinking about staging and design and it comes through. But that’s just me picking what I like,” he says.

The director is adamant that he was trying to do the material justice, rather than create something that could be seem as “A Wes Anderson Film.”

“It ends up seeming that way because I’m making the decisions,” he shrugs, “but not because I wanted it to feel like another thing I did before.”

In fact, according to Jason Schwartzman, whose long-standing relationship with Anderson dates back to 1998’s Rushmore, the only constant about working with Anderson is, “It’s always an adventure with Wes.” Unlike most animated films that are recorded and mixed with solitary actors in sound booths, Anderson recorded his actors live, on location.

“The way he wanted to do it was unorthodox,” Schwartzman smiles.

He explains that Anderson announced that he wanted to get all the actors together and do the film like a radio play.

“We got together several times over the course of a couple years, and we did it like a play, really acting it out,” Schwartzman reveals. “If there’s a scene that takes place outside, we all went outside. If we had to be digging in the scene, we would all just start digging. The sound was being recorded with just one microphone. That’s when can you get stuff like overlapping, cutting off, mistakes, starts and stops. It was really happening. Even the crickets; that’s real sound.”

Anderson explains that, while he was incredibly grateful to be surrounded by a team of exceptionally talented animators, it was his inexperience that allowed him to reinvent the process.

“I had my own ways that came from not having done [an animated film] before. I wanted to shoot it just the way I would a live action movie which, in the end, becomes, sometimes, extremely challenging.”

The challenge came from using a technique introduced in 1898 that has had little advancement since. With stop-motion animation, a three-dimensional object is manipulated millimeter-by-millimeter, frame-by-frame, until it appears to be moving. Since it takes 24 frames to make one second of film, the amount of work necessary to fill an entire 88 minute movie with stop-motion is astonishing, but it lends a real tactile quality to the work.

“When you watch an animated movie, you know humans made it,” Schwartzman says. “But then it’s put into a computer. But this,” he shakes his head in awe, “They’ll work all day, and it’ll add up to four or five seconds. On one hand, you know it’s so not real, but I think the thing that gives it a feeling of reality is that humans did it. You just know people touched it.”