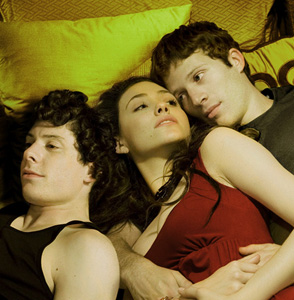 Dare investigates the lives of three intertwined high school students. The problem is, this effort isn’t truthful enough to resonate nor daring enough to provoke, and, therefore, it falls flat.

Broken into separate narratives, Dare follows three high school seniors who share a drama class and a whole lot of drama. First up is Alexa (Emmy Rossum), a girl who’s so stressed out about her need for scholastic perfection that she has to go on the pill to regulate her period. Sound ludicrous? Just go with it, because that birth control is going to come in handy real soon.

Stepping into Johnny’s life is sort of like an extended version of the monologues in The Breakfast Club. You realize that even though his life seems perfect – after all, he’s rich, popular and handsome – there are much darker forces at work, and he’s really just a lost little boy desperate for love and connection.

Written by David Brind, Dare evolved from director Adam Salky and Brind’s student thesis film during the graduate film program at Columbia. The problem is, it never truly evolved beyond the shell of an idea.