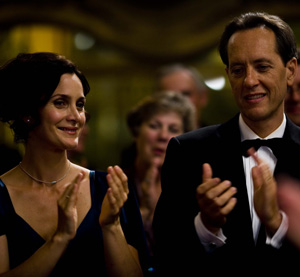 You know what? It does freaking hurt. A lot.

Everyone’s had those breakups that take a spear to your heart and keep digging the pointed end deeper and deeper until it feels like you’re going to actually die from the pain. And the best that can happen is that the open sore scabs over. It never heals. You pretend the wound is closed, but it remains forever tender.

The new romantic comedy Love Hurts is all about the process of being in love, losing your love and clawing your way back to regaining it. Written and directed by Barra Grant, the film stars Richard E. Grant as Ben Bingham, a middle-aged dentist who has slipped into a routine that is all but waiting for death. His vibrant wife (Carrie-Anne Moss), fed up with his lack to vivacity, leaves him dumbfounded and alone in the family home with their 17-year-old son Justin (Johnny Pacar).

Devastated by his estranged wife’s decision to move out and find comfort in the arms of another man, Ben goes directly into depressed mode. He refuses to remain sober, preferring to drink all day in his pajamas, playing video games with Justin’s high school friends.

Justin forces his father out of the house and gets him a new look that he is sure will win him a spot in the social scene. Before long, Ben is a hot commodity, dating several women at the same time. He has sushi dates with his nurse (Jenna Elfman), dines at extravagant restaurants with his trainer (Janeane Garofalo) and goes karaoke singing with a set of twins.

When his popular teenage son is unable to win over a pretty ballerina he falls in love at first sight with, Ben must relinquish his extravagant dating lifestyle and focus his energies on helping Justin cope with letting love go.

Love Hurts is a film dedicated to the small things you don’t normally notice about relationships. Don’t get me wrong; the situational humor is overly eccentric and often annoyingly unrealistic, which can be credited to Grant’s lack of on-screen charisma.

But despite its slow start and ridiculous comedy skits, the film left me hopeful. Not every relationship works out; in fact, most don’t. But it’s the moments of sweet exhilarating bliss that make the heart wrenching ones totally worth it.