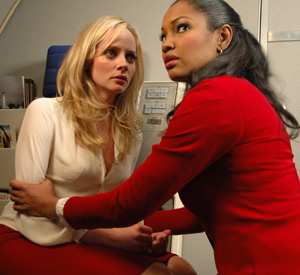 A provocative comedy about a day in the life of 10 different women, the eclectic characters in Women in Trouble all have one thing in common: problems.

With a small cameo by Josh Brolin, who plays a British rock star, Simon Baker and Joseph Gordon-Levitt round out the all-female cast as the only male actors in this melodramatic ensemble.

Written and directed by Sebastian Gutierrez, it’s a tongue-in-cheek gynocentric flick littered with scantly clad women in spandex pants smoking invisible cigarettes, and could easily be coined as sexist, although it’s a tag Gutierrez dismisses.

“There is always the danger of the sexist tag. But all my female friends are sexualized and confident and conflicted about all sorts of things,” claims Gutierrez, who draws his influence from the renowned Czech film director Vera Chytilová, whose movies are laced with feminist ideals.

The lives of these ladies somewhat intersect when Luxx gets trapped in an elevator with the bashful Doris (Connie Britton), who just had a fight with her sister Addy, who is distressed because she was caught having an affair with the husband (Baker) of her therapist. The therapist, quite obviously enraged after almost catching them in the midst of a sexual act, meets and ends up drunk in a bar with the two hookers, Holly and Bambi. As the movie plods on from one scene to another, more characters are introduced, including Garcelle Beauvais-Nilon, who plays Maggie, a flight attendant and confidante to Shelton’s character.

Although it’s mildly amusing, Women in Trouble gets a little tiresome at times with its multitude of female characters and clichés, and there’s not much plot to speak of. To its credit, it has oodles of quirky dialogue like, “Women are like flies. They settle on sugar or shit.”