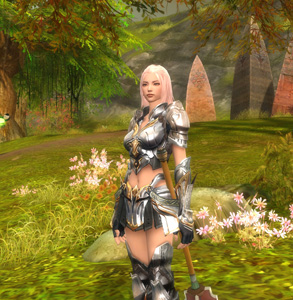 Take a study break and take on a quest in the gorgeous world of “Aion.”

With term papers and finals looming over our heads, it is easy to feel trapped and hopeless. Don’t get mad, get even with some virtual punching bags. Here are some great newer titles to help relieve some of that stress.

To those who have little experience with MMORPGs, “Aion” may look like just another “World of Warcraft” rip-off. Admittedly, the style is somewhat similar, the grinding is similar and the kill and fetch quests are similar. That said, at least it is similar to the most popular game in the genre.

While the style may be somewhat similar, “Aion” actually vastly excels at portraying the storyline in a way that few (if any) other MMORPGs has. The game opens with a gorgeous cutscene that introduces the world torn into light and dark halves and then tells the player that they have to pick only one side to swear loyalty to.

As the game unfolds, players will not only take part in standard quests, but there are also pre-scripted sequences that go that extra step to make you feel like you are the main character of this epic story. Even the minor characters are packed with unique attitude, making even standard MMORPG NPCs into memorable faces on the quest to defend your people in a post-cataclysmic world.

?At first glance, this ninjitsu-themed platformer’s cute graphics and bloodless combat looks like a kid’s game. The hardly subtle environmental message of defeating evil samurais to save the animals of the forest that are trapped inside of them (much like in “Sonic the Hedgehog”) could easily be seen as too childish for college-aged gamers.

“Mini Ninjas” actually offers an expansive, gorgeous world to explore. While a simple playthrough of the game could be taken down by a beginner, the hidden items and ability to choose from multiple hidden routes to execute your assaults offers a satisfying challenge even to seasoned gamers.

The boss battles are also quite massive, with intense quick-time events that play like a PG version of “God of War.” The tranquil, beautiful world combined with the intense combat make this a great place to lose yourself during study breaks.

While you may have seen your younger brother watching “Naruto” on the Cartoon Network, don’t judge it too quickly. The anime – especially the new “Shippuden” series – is a popular ninja action epic that has fans of all ages. The games, however, are extremely hit or miss, ranging from intense fighting games to lackluster action games.

“Naruto Shippuden: Legends: Akatsuki Rising” may not be the best of the Naruto titles, but it is an enjoyable beat-em-up. The game depicts the Akatsuki storyline through missions and cutscenes that are actually pretty descriptive for a portable game.

The gameplay itself is the basic running and punching, but the addition of signature magic attacks for each character gives the game some decent variety. Likewise, the ability to buy and upgrade items and scrolls gives the game more of an action RPG feel. Sure, it may be too easy for hardcore gamers, but it does offer some fast-paced combat when you need it.

The King of Iron Fists competition is back for yet another tournament between martial artists, wrestlers, robots and kangaroos. This time around, the focus of the game is on the Scenario Mode – an expanded version of the classic brawler-based Tekken Force Mode – where we are introduced to newcomers Lars and Alisa. In this storyline-heavy mode, you can beat up armies of baddies to unlock characters for the Arena, a watered-down version of the Arcade Mode.

As always, the Arcade Mode is still intact, but this time it has followed the popular trend of forgoing storyline to get straight into the action. The character customization has also been expanded, offering a variety of costumes for the Tekken fighters that actually provide bonuses in Scenario Mode. Otherwise, the graphics are a bit nicer and everything else is the classic button-mashing goodness that is the “Tekken” series.

Snatched once again from obscurity, “The Warriors” has been reworked yet again into video game form. This Live Arcade retelling of one gang’s quest for survival has now been turned into a side-scrolling beat-em-up, offering a retro action feel at the cost of voice-overs.

The game does expand a bit on the classic gameplay style, offering multiple routes and some scripted events, but it all boils down to beating up tons of costumed gang members over and over again. It may lack the depth of the game that reintroduced the red vest-wearing Warriors to the youth of America, but it is still good for some mindless fighting fun.