Who's that Guy?: Getting to Know Ron Artest 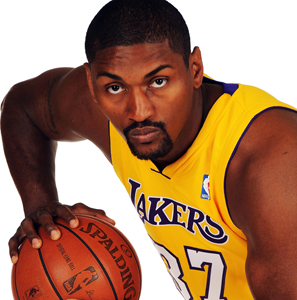 The explosive Ron Artest is gelling well with the Lakers.
(Credit: NBA Photos)

For years he’s been a definitive foe of the Lakers as part of conference rivals the Sacramento Kings and Houston Rockets. His controversial actions both on and off the court have resulted in one of the most volatile reputations in the league, but the Lakers and the city of the Los Angeles welcome Ron Artest with open arms.

Artest grew up in Queens, N.Y. He took up basketball as an outlet to channel his anger from his parents’ divorce. He was on his high school team at La Salle Academy and part of the St. John’s University squad from 1997 to ’99.

The Chicago Bulls selected Artest as the 16th pick in the 1999 draft, then he was traded to Indiana during the 2001-02 season. As a Pacer he posted his best career numbers, was chosen as an All-Star reserve and named the Defensive Player of the year in 2004. But it was during this time that his reputation for being an explosive personality took off.

On Nov. 19, 2004, Artest was at the center of one of the most infamous brawls in NBA history, “Malice in the Palace,” when he charged the stands to punch a fan who tossed a drink on him. The verbal and physical altercation between the visiting Pacers and Detroit Piston players and fans resulted in Artest being suspended for the remainder of the season – the longest non-drug or betting-related suspension ever – bad blood between Artest and his teammates and his eventual trade to the Kings.

Artest continued to shine as a defensive specialist in Sacramento, but controversy (an incident with Animal Services involving his dog) and legal troubles (a 10-day jail sentence for domestic abuse) continued to swirl around him. He even released a rap album, My World, which gave fans a glimpse into his tumultuous surroundings.

After being traded to the Rockets on July 29, 2008, Artest successfully integrated into the Yao Ming and Tracy McGrady-led team, so well that the squad was able to advance to the second round of playoffs for the first time in 11 seasons. It was during game two of the Western Conference Semifinals against the Lakers that Artest and Kobe Bryant shared a passionate exchange of words, leading to Artest’s ejection from the game.

Even so, Artest has long been a champion of Bryant and the Lakers. After the Lakers lost to Boston in the 2008 NBA Finals, Artest told Bryant, “I’ll never let this happen to you again.”

Artest and Laker forward Lamar Odom have known each other since early childhood in New York. The duo has played together – as opponents and teammates – for over 20 years and has remained close friends.

In July, Artest became a Laker, signing a five-year deal for a reported $33 million. He chose the number 37 in honor of his grandpa, and Rolling Rock Beer. His grandfather worked at the brewery for 37 years.

Aside from the positive history he shares with his teammates, and the fact that Artest is definitely maturing on and off the court (He turns 30 on Nov. 13.), Coach Phil Jackson has had experience dealing with strong personalities in the past: Shaquille O’Neal, Dennis Rodman.

In the seven regular season games that Artest has played as a Laker, he has shown his defensive prowess – especially guarding Joe Johnson in the third quarter of the Nov. 1 home game against the Hawks and also on Kevin Durant Nov. 3 against the Thunder in Oklahoma City – and has offered a glimpse to the skills he can deliver on offense. On Friday night, he amassed a solid 19 points, seven assists and six rebounds in the Lakers’ 114-98 victory over the Grizzlies at Staples Center. The 6-1 team is currently on a five-game winning streak.

However, his most significant moment thus far came during the final minute of the game against his former team in Houston Nov. 4. After sinking a trey from the top of the key, giving the Lakers a 92-89 lead, the Rockets walked to their bench for a time out and Artest stood at center court with his hands formed mocking a T-sign. It was an electrifying moment for Laker fans, whether a supporter of Artest or not. The Lakers pulled off a 103-102 win in overtime.

Everyone will see the true potential of Artest as a Laker when the team’s big men, injured center Andrew Bynum (right elbow) and forward Pau Gasol (right hamstring), return to the starting lineup, hopefully when they host the Phoenix Suns on Thursday. The Lakers head to Denver to face the Nuggets Friday, then return to Staples to play the Rockets Sunday and Pistons Tuesday.