The Raveonettes: Fresh, Spontaneous, In and Out of Control 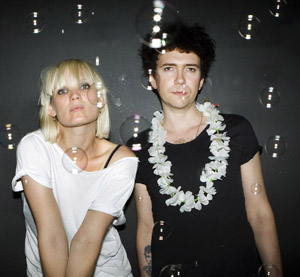 The Raveonettes’ music is about as old school American rock ’n’ roll as you get, proudly wearing 1950s and ’60s influences on their sleeves, including the gritty noise of Velvet Underground, concise, spunky pop of Buddy Holly and melancholy optimism of oldies like the Ronettes.

The influences don’t end there, however, which you can clearly hear in their latest output – a full-length album, In and Out of Control – that is loaded with garage and noisy shoegazer rock. Not surprising, as they originate in Copenhagen, the Nordic regions of Western Europe that have often embraced such genres.

In and Out of Control follows the critically praised Lust Lust Lust of late 2007. And, while the finished result feels like a natural progression from previous work – concise songs, sparse arrangements with alternating fuzzed out and shimmering guitars and complimentary guy and girl vox – this go around, the effort took a different tone when it came to the studio experience.

I called songwriter and vocalist of the group Sune Rose Wagner to speak about the process, halfway expecting a tired and anxious fellow at the other end when my first few calls went to voice mail. The guy was apparently slammed with interviews promoting the latest release, and after an e-mail from the publicist asking me to hold off, followed by much time sipping coffee and surfing the Web, I try again – and actually find him to be disarmingly open, friendly and relaxed. He spoke to me kicked back from the comfort of his homestead in New York.

“Sure, this time it was a huge difference,” Sune chirps excitedly, a good trace of Scandanavian chopping into his accent. “Basically no songs were ready when we went into the studio, so there was a month of working, meaning it was fresh, spontaneous times the whole way through.”

Sune continues, differentiating the process, “We’ve had Mo Tucker of Velvet Underground, Ronnie Spector [and producer Richard Gottehrer of Blondie and the Go-Go’s, on previous records], which were a great homage to our inspirations.”

The Raves have never been shy about embracing their influences, proudly wearing them on their collective sleeves as they’ve stated before that even their name is a hybrid of two of the greats (Buddy Holly’s “Rave On” crossed with the Ronettes).

“But, this time we did it alone, just the two of us, myself and Sharin,” referring to original bandmate Sharin Foo (vocals, bass), whom he typically brings completed songs to. “I do most of the songwriting and music, I play it for Sharin. Since there were no collaborations [with outside musicians], because of that it was really quick. We’re normally very strict. In this case we bounced a lot of ideas around very freely.”

There is an ominous feeling overlooking the album tracks, titles covering dark subject matter including “Gone Forever,” “D.R.U.G.S.,” “Suicide,” “Breaking Into Cars” and “Boys Who Rape (Should All Be Destroyed),” the latter with a chipper outro sung so buoyantly you cringe and smile at the same time. “Ba-boys ba-boys who rape should/Be-be, be be-be/De-stroyed!”

“I naturally go dark,” Sune comments on the dichotomy. “When you have instrumentation, music so energetic and happy sounding, it’s too obvious to match that lyrically. You need contrast. We have Beach Boys catchy melodies, and dark words. You can’t let it get too sweet.”

This is hammered home in the charging guitars and triumphant melodies of “Last Dance,” peppered with some rare but peppy computer bleeps and bloops. And the words, sung sweetly: “I adore you. .. And every time you overdose, I rush to intensive care ... If this is the last dance, then save it for me, baby.”

“Your boyfriend’s mean, and your mom’s a bitch” begins “Suicide.” “Little runaway girl, do it again,” he implores before a parade-like charge into the chorus. This could all easily be comical with their sweet singing, but the force and weird sense of mystery permeating the music makes it all oddly believable.

Promoting the new record, the Raveonettes hit the road in America next, followed by more dates in northwest Europe and England. I asked about the upcoming tour, and how their devoted and growing audiences might react differently from one continent to another.

“We do well in both,” he says, referring to the reactions they’ve had in both Europe and America.

But when I press where specifically their strongholds are, Sune continues, “Well, certain places like Spain and France, it’s always a great reception. And in America, what you might expect,” he adds with a laugh, “both the coasts seem to react well to us, but not so much in the middle. You know.”

In and Out of Control is currently available. The Raveonettes will perform Nov. 13 at the Henry Fonda Theater. For more information, visit theraveonettes.com.