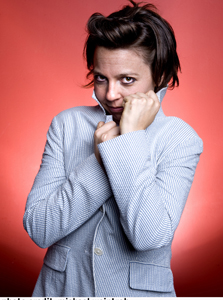 Erin McKeown’s new album (her seventh) Hundreds of Lions features a song called “The Lions” where she sings, “There’s a risk, there’s a twist, in anything worth doing.” The words apply to Hundreds of Lions in general where McKeown experimented with production techniques.

“We squished acoustic sounds through synthesizers and programmed electronic squiggles to mingle with orchestral strings recorded in a country church,” says McKeown. “We recorded brass and woodwinds early instead of layering them on top. Finally we just whittled away what didn’t work.”

McKeown also has a new label; Hundreds of Lions is released on pal Ani DiFranco’s Righteous Babe Records. McKeown will showcase the new music during her Nov. 20 appearance at McCabe’s Guitar Shop in Santa Monica.

Get Busy Committee Says Uzi Does It

Hip-hop act Get Busy Committee has a new album out called Uzi Does It, and they’re making it real easy for their fans to hear the new music. You can get half of the album’s tracks for free if you’ll share your bounty with friends via a blog or on MySpace, Twitter or Facebook.

And if you want to buy a download of Uzi Does It, it won’t cost you an arm and a leg; a deal has been made with digital retailers worldwide to keep the album price at around $6. Even the collectible 2GB flash memory drive version of the album, in the shape of an Uzi submachine gun, is reasonably priced at around $20.

Get Busy Committee is Ryu and Apathy from Demigodz, and they get a little help on Uzi Does It from super producer and rapper Scoop Deville. Find out how to get the free tracks by visiting getbusycommittee.com.

Harley Flanagan, a founding member of Murphy’s Law and Cro-Mags, has released a solo CD and DVD package called Harley’s War: Hardcore All-Stars that features just that – a who’s who of big names from the New York hardcore scene. Members of Suicidal Tendencies, Agnostic Front, Bad Brains, Murphy’s Law, the Business and Warzone all join Flanagan as he rips through dozens of tunes, including Cro-Mags songs and other hardcore classics like the Bad Brains’ “Regulator.”

The CD includes a dozen songs, plus a bonus four-song demo from 1982, while the DVD features two shows filmed in New York City (one at the legendary and now defunct CBGB) and outtakes from gigs in Japan and Germany. Flanagan also has a new book out called Harley Flanagan: Life of My Own, NYHC-OG.

Sarah Assbring, a.k.a. El Perro Del Mar, has released her third full-length album with the title Love is Not Pop. The Swedish songstress admits she oversimplifies when she describes how the album of sublime pop came about.

“I’d spent some bad times in New York and some good times in Paris and both these cities have made a great imprint on this album and my current outlook on love,” says Assbring. “So I’ve decided to call it Love is Not Pop. The songs on the album are all pop songs and they are all about love. But naturally it is not all as simple as that.”

It is simple, though, to check out El Perro Del Mar in concert; see her at the Hotel Café Nov. 23.

Monster Monster is Loose (And It Has Your Guitar)

The Almost has released a new one called Monster Monster, and everyone who buys the set through the band’s Web site will be automatically entered to win a guitar used in the recording of the album. And it’s not just any guitar; it’s an autographed Squier Classic Vibe Stratocaster ’50s Guitar from the Fender Corporation. For your chance to take home the gorgeous Strat, purchase a copy of Monster Monster by the end of November at TheAlmostMerch.com.

Want something different to listen to this holiday season? You’ve never heard Handel’s Messiah quite like this, performed with a full orchestra and a rock band that includes LaChanze (“The Color Purple”), J. Robert Spencer (Broadway’s “Jersey Boys”) and MiG Ayesa from “Rock Star - INXS.” CD and DVD versions of Messiah Rocks are available now.