The Glory of "Glee" 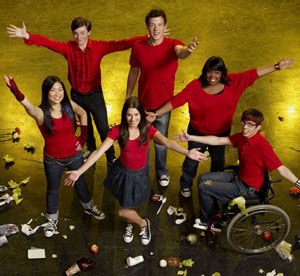 At first, the idea doesn’t seem all too attractive. Sounding like the adult cousin of High School Musical, “Glee” follows a cast of reject show choir wannabes looking to follow their dreams and make their way through the everyday challenges of being teenagers.

Not surprising is the fact that the glee kids are social outcasts, defined by the woes of unpopularity and surprise slushee attacks. Occasionally, the cast will break into elaborate Broadway-style musical numbers, creating an irresistible musical dynamic made to complement its many unfolding storylines.

But before you reach for the barf bag, trust me, “Glee” is actually good – really good. As the season’s standout TV phenomenon and Fox’s newest cash cow, “Glee” avoids the flowery clichés you’d dreadfully expect and instead goes for more taboo issues, tackling them head-on.

Married glee club director Will Schuester, played by Matthew Morrison, flirts dangerously with infidelity, leading on a female colleague while coping with his broken dreams to pursue music and the reality of being middle-aged and middle-class.

Though most times light and fluffy, the music behind “Glee” serves as a reminder of the show’s more evocative themes. Whether it’s the ironic teen pregnancy of celibacy club president and ex-cheer captain Quinn Fabray (Dianna Agron) or the coming out process of the flamboyant, designer-donning Kurt Hummel (Chris Colfer), neither the show nor the music even consider playing it safe.

In fact, it’s the show’s unexpected dark humor and snappy jokes meant to satirize society’s fixation on stereotypes that allows it to transform the cheesy Mary Poppins moments into something a bit more culturally relevant – you know, like the infamous “Single Ladies” dance from Beyoncé (which an entire episode of the season was dedicated to).

But music is “Glee”’s backbone, being almost as important as the show itself. On the show’s soundtrack, Glee: The Music, Volume 1, the songs serve as the single bond between “Glee’”s highly flawed band of characters. Best described as a mixed palette of some not-so-average covers, the collection samples hits from legends (Elton John and Queen) to more contemporary names (Kanye West and Carrie Underwood).

Lacking original material themselves, the cast relies on creative arrangements, or often totally reworked compositions, to give each track signature “Glee” style. Overflowing with 12-part harmonies and multi-layered vocals, group numbers like the infectious “Don’t Stop Believin’” or the brilliant Avril Lavigne song “Keep Holding On” are almost guaranteed to be surefire hits. The cast channels Freddie Mercury’s intense falsettos and wild dramatics on “Somebody to Love,” one of the strongest additions to the collection.

Across 17 tracks, somehow the makers of the show have been able to pull together such an eclectic compilation of songs and still manage to create an end product that is thoroughly listenable. The genius formula explored on Volume 1 is one of balance – theatrical not campy, poppy not bubblegum and incredibly silly yet still believable. “Glee” succeeds most when making each song its own.

On the flip side, copycat tracks like the show’s versions of Kanye tune “Gold Digger” and the Jordin Sparks and Chris Brown smash “No Air” don’t do “Glee” any favors. Coming off as bad karaoke or perhaps the most vanilla hip-hop you’ve ever heard (Morrison’s version of the “Thong Song” was thankfully omitted.), these songs are turn-offs to non-“Glee” fans and are likely reasons to keep dissenters from being sucked into the “Glee”-sphere.

The show’s lead, self-centered drama queen Rachel Berry, is played by Lea Michele, a veteran plucked right from the Broadway stage (She performed in the original cast of Tony-winning “Spring Awakening.”). On the show, her character is cold and obnoxious, but in the music, her voice is nothing short of magical. On Rihanna’s “Take a Bow” and Celine Dion’s “Taking Chances,” Michele mildly strays from the original and belts out each pitch-perfect note with ease and clarity.

Michele’s ridiculous (in a good way) vocal talent is able to justify Rachel’s equally ridiculous antics that can drive audiences crazy. Suddenly, Rachel’s pain of being underappreciated, teased and picked on is better understood; her heartbreak is more relatable.

Opposite Rachel is the jock-turned-leading man, Finn Hudson (Cory Monteith). Monteith dazzles for the most part, but does best when matched with the right song. His airy vocals and slight rasp impress on the classic “Can’t Fight This Feeling.”

Other notables on the CD are R&B-inspired “Bust Your Windows” and “Hate on Me” by sassy glee-ster Mercedes Jones (Amber Riley) as well as jazz-infused “Dancing With Myself,” a solo by Artie Abrams (Kevin McHale), an enthused “Glee” kid who is bound in a wheelchair. With such a talented cast on board, song assignments should be doled out to highlight more of “Glee’”s other rising stars. Michele, though amazing, commands the solos in nearly half of the collection (eight tracks of the 17).

“Glee”’s instant charm and appeal to the masses can be attributed to its daring nature to be different. Touching on variances of race, sexual orientation and disability, “Glee” sensitively celebrates society’s differences without losing any of its punch or humor. Surely, we can all recall the kid who was called names or desperately wanted to be popular – maybe we relate to them personally.

Luckily, Fox’s prized gem, “Glee,” fights for the underdog in all of us.

Special Features
Fans and record labels are addicted to TikTok. But some artists are just saying no
977 views