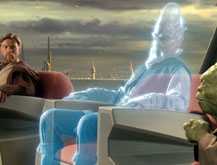 So little was expected of the original Star Wars before it opened in 1977 that 20th Century Fox, the studio overseeing its distribution, had pinned all its hopes for a sci-fi hit that year to Damnation Alley, a nuclear apocalypse spectacle starring Jan-Michael Vincent and an army of radioactive cockroaches.

Star Wars was considered such cinematic small fry that it initially was released on only 43 screens. By contrast, when Star Wars: Episode III – Revenge of the Sith – the sixth and final installment in writer-director George Lucas’ epic series – was released shortly after midnight last Wednesday night, it reached into every corner of the known universe, erupting onto as many as 9,000 screens.

That a single story – about a farmboy and his wayward father, who wants his long-lost son to follow him into the family business – could exert a hold on the popular imagination for so long may be Lucas’ greatest accomplishment. The galactic saga has cut across generational lines, color barriers and language differences to become the one movie that virtually everyone walking the planet – maybe several planets – has heard about.

"Twenty-eight years is an enormous period of time for one work to play such a big role in culture and society," says Robert Sklar, author of Movie-Made America.

The series, which thus far has earned a staggering $3.4 billion, changed forever the ways movies are made and marketed. "Before these movies there really wasn’t a summer movie season as we know it today," says Paul Dergarabedian, president of Exhibitor Relations, a box office tracking company in Los Angeles.

Several Hollywood studios were on the verge of bankruptcy when Star Wars rescued the box office in 1977, and Hollywood is in the doldrums again now, with movie attendance down 6 percent from this time last year. The summer season that once didn’t exist now depends on Revenge of the Sith doing big business.

"Everyone is looking to this to turn things around," says Dergarabedian.

Whatever its impact at the box office this summer, Star Wars’ impact on the culture is now indisputable. The mythology has had such power that when Enron – one of the dominant American corporations of the 1990s – was cooking its books with a constellation of phantom companies, CFO Andrew Fastow gave them names such as "Jedi," "Death Star" and "Chewco." And Lucas turned movies into such a global commodity that by the ’90s, the Hollywood entertainment-industrial complex became America’s second-largest export business, trailing only aerospace.

Even that cornerstone of the military was pulled into the movie’s tractor beam when President Ronald Reagan’s proposal for a nuclear shield – which had been going nowhere as the Strategic Defense Initiative – suddenly gained congressional backing when it acquired the nickname Star Wars. Taking his rhetorical cue from the movies, Reagan called the Soviet Union the "evil empire," and soon America’s Cold War nemesis had been crushed under the heel of history – and the Star Wars marketing juggernaut.

More lastingly, Star Wars made the blockbuster a permanent fixture on the summer movie calendar, putting Hollywood’s marketing machinery on a war footing for as long as the kids were out of school. Orbiting in hyper-drive around Lucas’ Death Star, summer movies became about shock and awe.

Following the success of Jaws in the summer of 1975, and Star Wars two summers later, adolescent moviegoers who could be relied upon to return to see the same picture again and again became, for the first time, the driving force that determined which movies got made, and which didn’t.

"I would argue that George Lucas helped to lead the cinema away from an adult awareness in the early ’70s that was very promising," says David Thomson, author of The Whole Equation: A History of Hollywood, during a phone interview. "As you look back on some of those films, it’s painfully clear that they wouldn’t get made today. And yet a whole lot of films that in some way resemble Star Wars are being made."

Neither withering reviews nor bad word of mouth have much effect on younger audiences, who flock to fill the multiplexes on opening weekend. "By the time we’ve all seen that it sucked," writes Tom Shone in Blockbuster: How Hollywood Learned to Stop Worrying and Love the Summer, "it’s a hit."

The studios had little sense of the potential for franchising movies before Lucas took the old Buck Rogers and Flash Gordon serial adventures and gave them a quality that some saw as epic, and others as gargantuanism. Fox simply gave all the sequel rights for Star Wars to Lucas, assuming they weren’t worth anything. In addition to the $3.4 billion grossed by the five Star Wars films to date, the merchandising and other ancillary marketing rights have produced a treasure for Lucas estimated at $9 billion. (When the original trilogy was released on DVD last September, it made $115 million worldwide on its first day.)

With the money from the movies, Lucas built his own empire – a word not tossed around lightly at his Marin County redoubt, Skywalker Ranch – creating his own production company (Lucasfilm), a special effects shop (Industrial Light & Magic) and sound divisions (Skywalker Sound and THX). He also gave birth to what is now Pixar, the computer-animation studio that was spun off from ILM.

After 16 years away from the saga, Lucas returned in 1999 with The Phantom Menace, a movie that managed to make nearly a billion dollars in spite of the fact that nobody seemed to like it very much. Speaking of which, nobody liked Damnation Alley much either. The irradiated bugs lasted longer than the movie lingered in theaters. There are no plans for a sequel.