Lyoto the Dragon: It’s All in the Training 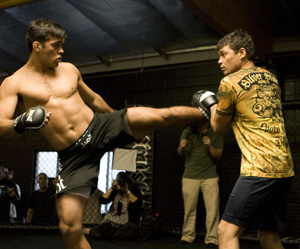 Such was the tale of a young Lyoto, who not only suffered through some inane punishments, but, alongside with his two brothers, underwent some of the most unique forms of physical training that eventually helped make him one of the biggest names in today’s mixed martial arts field. In fact, the Dragon’s training sessions (along with his tough ordeals in the corner of a given room) were so unique that a new breed of martial arts was branded after his family name: Machida Karate.

It was that niche style of mixed martial arts that carried the day for the Dragon a couple weeks ago in UFC 104, when Machida defeated Mauricio “Shogun” Rua for the Ultimate Fighting Championship light heavyweight title. Looking at the scorecards, Machida narrowly defeated Rua in a unanimous decision, with all three judges scoring the fight 48-47.

Yet, here is the question – did the Dragon really do enough to defeat Shogun? While this has been fodder for intense discussion on UFC blogs, discussion boards and other highly-populated MMA media, the final result proved one scary thing: the scoring showed that the gap between the Dragon and Shogun was not as wide as anyone in the Machida camp had hoped it to be. In fact, the gap may be too close for comfort for Machida and his drudges, and Lyoto’s metacarpal injury and hand injury could not have come at a better time, giving the Dragon’s people the perfect excuse to postpone a proposed Jan. 2 rematch.

While some blogs and Web sites have predicted a possible rematch coming as early as March 2010 (contingent upon Machida’s recovery, of course), it may behoove the Dragon to push the planned rematch even a couple months later. After all, if Machida wants to boast that the gap between him and Rua is wider than the scorecards of UFC 104 indicated, he is going to have to spend a little extra time in the corner, sitting on his ankles with his eyes closed.

See, in the week leading up to UFC 104, the Machida camp hosted a little open training session for all media-trained eyes to see, complete with a scrum, freestyle sparring sessions and a whole lot of time hyping up the apparently glaring differences between the Dragon and his supposedly “lesser” opponent.

Now, to be fair, Machida did beat Rua by unanimous decision. The problem is, the way Machida almost disrespectfully ridiculed Rua just three days before UFC 104, there is no way the Dragon can simply rely upon all the judges ultimately scoring in his favor – not when the scoring came in as 48-47. Machida boasted he was a far superior fighter than Rua, a complete mixed martial artist who had more strength, training and patience than his opponent.

“I am definitely a more patient fighter,” Machida said at the open training session. “Shogun is going to want to come at us, but his lack of discipline is going to prevent him from snatching the throne away from me.”

Of course, when the scoring is 48-47, even if it is unanimously in favor of Machida, can the Dragon claim he was the clear-cut winner in UFC 104 – especially when he basically called out Rua for lacking sufficient discipline to even think of challenging Lyoto for the UFC light heavyweight title? And that is what Machida is going to have to do between now and the much-anticipated rematch, whenever that will be.

If the Dragon is going to go around town boasting he is more disciplined than Shogun, that he has voluntarily trained in the martial arts since age three and has mastered his father’s unique spin on karate by virtue of his relationship with his fight-ready brothers, then he better show he can do better than a unanimous decision with 48-47 scoring.

In fact, Machida may have to do all he can to prevent the impending rematch from going to the judges entirely. That means the Dragon has to take the bull by its horns and settle matters on his own terms – and win the fight in the Octagon before the final bell rings.

We all know there will be a rematch – after all, a repeat of Machida-Rua is just too juicy to pass up. Yet, Machida has a lot more at stake than just a throne. The Dragon has to show his bite is as strong as his bark.

The question is: Does Machida have enough discipline and training to show he is disciplined and well trained enough to distance himself from Shogun? We have to wait until next spring to find out the answers.