Skateboarding Gods: The Lives of the Infamous Z-Boys are Brought Back to the Big Screen in Lords of Dogtown 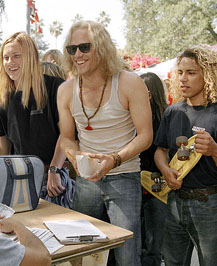 "There have been so many great sports teams … and we got two films out of this!"

For fans of skateboarding, this quote from Stacy Peralta is a dream come true. Peralta exclaimed this line with joy and slight disbelief that another film has been completed about him, his friends and the revolution they started.

First it was Dogtown and Z-Boys (2002). In this documentary, writer/director Peralta told the story of himself, Tony Alva, Jay Adams, the rest of the Z-Boys, and the style of skateboarding they invented in the 1970s.

Now it’s Lords of Dogtown, a narrative film directed by Catherine Hardwicke (Thirteen) that looks more closely at the lives and personalities of these kids.

At the time, the kids’ hometown of Venice was a much rougher place than it is now. Most kids either surfed or skated to express themselves. However, if it weren’t for two major concurrent events, history might have been different.

First, there was a drought in Southern California, and many homeowners were forced to keep their pools dry. At the same time, the skating world saw the invention of the urethane wheel, which allowed skaters to go faster and higher. Combine these two occurrences with a bunch of restless teenagers who saw empty pools as a perfect place to test out these wheels, and a new skating style was born.

Many of the people involved with the film come from skating backgrounds. Peralta wrote the film and Alva served as its lead consultant.

Originally from Venice, Emile Hirsch (who plays Adams) occasionally skipped school to go to his favorite skating spots. John Robinson (who plays Peralta) grew up in Oregon, where he says there was a big skating crowd.

Hardwicke is from Venice as well and, as a result, she is highly familiar with the subject. She also previously worked on the skater film Thrashin’, which she deems "one of the cheesiest skater films of all time."

On the other end, Victor Rasuk (who plays Alva) had not skated once before, and he says that worried him at first.

"I got criticized," he says, by a group he calls the "hardcore" skaters. "I knew people would be critical. Thank God I had three months of training."

Rasuk is talking about the skating boot camp that Hardwicke put the lead actors through before shooting. For this training, the actors woke at five in the morning, practiced surfing for two or three hours and then skated for the rest of the day. At the same time, a couple of the actors got to hang out with the actual people they would portray.

Rasuk learned a lot from Alva, and even discovered something about his personality.

"I heard Tony had a reputation for having a huge ego," he says. "I thought that was going to be an obstacle, but it was the opposite. He was so productive about the movie. He wanted it to be good."

Although the term "dream come true" was used more than once by the people involved, the goings did get rough at times. Robinson, Rasuk and Hirsch all spoke about getting a little too cocky with their new skills and getting hurt in the process.

"I was so obsessed with doing my own stunts," Robinson says. "I went really high in the pool, and my back foot slipped off. I sprained my ankle. This was halfway through the shoot. I couldn’t even walk. I thought they were going to have to shut down production."

Thankfully there were no major delays in shooting. It just took awhile to get it off the ground; David Fincher (Fight Club) was tapped to direct at first but later dropped out.

The cast had nothing but respect for Hardwicke – especially for her motherly ways whenever a cast member took a rough spill. According to Hirsch, "Catherine was good about comforting you, and 10 minutes later, you wouldn’t believe it, but you’re doing the same thing again."

Even though there is a lot of skating action in the film, Rasuk says the story can reach everyone, even those not into the sport.

"The film has such a universal story, with conflicted characters," he says. "They came from nothing, and when money came along, the film shows how that influenced their decisions."