The Backstreet Boys: This Is Us 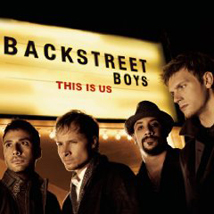 The Backstreet Boys, down one member, Kevin Richardson, are back with This Is Us, the third album since their comeback. Backstreet Boys fans that have been around since the group’s self-titled album will realize, at first listen, the Boys have taken a different path with their music.

Working with producers and co-writers such as Max Martin, T-Pain and RedOne, the music is dripping with club beats and the right collaborations for mega hits. This first single off the album is “Straight Through My Heart,” which has a club beat to it, but keeps the BSB lyrics that you are familiar with from the ’90s.

There are questionable songs on the album, and then there is “PDA.” The seventh track on the album, and possibly the worst, strays from the BSB image and sound with the lyrics, “We’d be at the club, the restaurant, the grocery store or the movies, kissing and touching with my hands all over your booty.” This new Backstreet Boy material is fine for Kanye West or even Britney Spears, but the group goes from sweet love songs hidden under a techno beat to this disingenuous noise.

Not a terrible attempt at an album, but still not better than their career as a boy group before the Millennium; which, pardon the pun, was by far their last great album.

This Is Us is currently available.