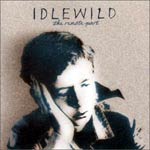 Over the past few years, you’ve probably heard the whispers and read the articles about this Next Big Thing from the British Isles, but the unfortunate reality is that most people in the States haven’t yet had the chance to hear Scotland’s Idlewild. The upcoming stateside release of their third album, The Remote Part (available March 25th) should change all that. The lads have stripped away a few layers of their punk rock past and made the move towards a slightly gentler realm, but without severing that thread of energy and intensity from their previous efforts. That concentrated passion ties this album together brilliantly. Their invigorating blend of intelligent punk rock and subtly haunting pop sounds more like the latest American indie darlings after one too many Psychedelic Furs albums than their current United Kingdom counterparts——Coldplay, the Doves, and Travis. The Remote Part is R.E.M’s Reckoning dipped in the English Channel. Start to finish, of course, there are the occasional unmagnificent moments, but they are scattered and far too few to get in the way of the beauty and poetry found throughout the rest of the album. The Remote Part is a valuable and dynamic record that should allow Idlewild the applause and acclaim they deserve. Grade: A-
Article posted on 6/18/2004
This article has been viewed 1443 times.