The Dead '60s: Spirit of The Clash Alive 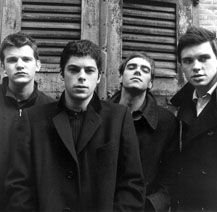 For the moment, Charlie Turner doesn’t mind being a long way from home. The bassist for British band The Dead 60s is basking in California sunshine, laying poolside at a Los Angeles hotel. Having just completed a tour opening for Garbage, the band is enjoying a day off from performing, with only a gig at the KROQ Weenie Roast standing between them and a flight home to England.

"Oh, I’m missing the food," Turner laughs. "I miss the English grub; especially breakfast. The bacon over here isn’t the same. In England, it’s thicker and moister – a real piece of meat!"

Turner’s verbiage about the morning meal can almost be applied as a description of the music made by The Dead 60s, evident in their current single "Riot Radio" – something savory and hearty in every bite.

Being four good-looking young lads from Liverpool makes it impossible for the members of The Dead 60s to not be asked about The Beatles, a band they sound nothing like.

"Because we’re from Liverpool, we sort of grew up listening to The Beatles," Turner explains. "It’s one of Liverpool’s biggest industries; the tourist thing, off the success of The Beatles. It’s a big part of the income for Liverpool. So we’ve got a lot of respect for The Beatles, but at the same time we wanted to do something else that wasn’t typically Liverpool."

With guitars scratching out reggae rhythms, forceful but concise lyrics sung by Matt McManamon and dub effects galore for the bass and drums, the music of The Dead 60s is more akin to Sandinista-era Clash than anything out of Liverpool. McManamon sings with the same urgency as did Joe Strummer, late frontman for The Clash. He sings with the same yearning in his soul, but less scabrous – there is no agenda here to change the world.

Turner easily puts his finger on the difference. "The Clash were a political band and we’re not. We don’t write about politics, really. We just write about our surroundings and whatever we’ve been doing.

"Our albums are kind of just ‘city’ albums. They’re born out of the environment that we recorded it in. If The Clash were around today, they’d probably be writing about George Bush. We can’t be bothered doing that because 18 hours a day, 24 hours … we’ve just had enough. It just doesn’t interest us."

As The Dead 60s rip through "New Town Disaster," one gets the idea that the song is about the failure to find greener pastures, a common theme in much of today’s music. But the song is a classic example of the band writing about what they know, in this case, the remnants of war in their hometown.

"The idea for the song came from the fact that the inner city got bombed during the Second World War," Turner relates. "They created these new towns on the outskirts of Liverpool that were supposed to be paradise. They were in the middle of fields, but they just built them out of concrete. They ended up being monstrosities; urban disasters."

But if you don’t know that story, the song’s lyrics apply to frustrating circumstances universally; vagueness that Turner says the band strives for.

"Even in our videos we won’t use the obvious landmarks. If we were in New York, we wouldn’t get a picture of the Statue of Liberty. We’re really just saying that things are the same everywhere."

Except, of course, for the bacon situation.

The Dead 60s self-titled debut album will be available May 31. For tour dates and more information, visit www.thedead60s.com.