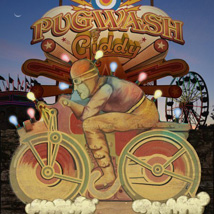 Pugwash is an Irish band that doesn’t play punk versions of traditional Irish songs, and they don’t sound anything like U2. There is, however, a very recognizable quality to the band’s music that derives from a pair of British groups: XTC and the Electric Light Orchestra.

Songs like “Apples” display the kind of pop genius that XTC was noted for; songs with concise and seemingly simple melodies float the listener to a surprise vocal hook. Head Pug Thomas Walsh is a cohort of XTC’s Andy Partridge and Dave Gregory (Ape House is Partridge’s label.), and that association speaks volumes as to the quality of the music here.

Walsh says he grew up being fascinated by ELO, and you can hear that band’s influence mashing-up with lush Beach Boys-style harmonies on standout track “It’s Nice to Be Nice.” Elsewhere Pugwash sounds a bit Beatles-ish performing “Two Wrongs” and McCartney-esque with “Sunrise Sunset;” about the only time they don’t give a nod to British acts is on “Monorail” where they channel Beck.

Giddy is actually a compilation of various European Pugwash releases that serves as a sampler for the American audience until the band releases their next album stateside in early 2010. At any rate they’ve picked a perfect title for this release; one listen will have fans of understated pop absolutely giddy.