“Just 45 Minutes From Broadway”: Now-Jan. 31 @ Edgemar Center For the Arts 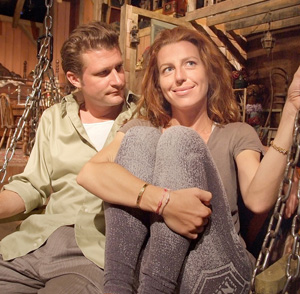 Henry Jaglom’s “Just 45 Minutes From Broadway” is a thoughtful and, at times, provocative look at the multilayered lives of a family of New York theater actors.

Hard times have fallen on the Isaacs family as the worsening economic climate has made work scarce. George, the family patriarch, has become a grouch in his old age and goes on extended rants about the annoyance of modern technology and Internet tools such as Skype. His wife Vivien, a former actress, has resigned herself to a simpler life of domesticity and mostly tends to their youngest daughter, Pandora (Tanna Frederick in her most capable performance to date). Panda, as her family calls her, is an emotional wreck, the result of yet another failed relationship, and prone to frequent fits of crying.

She and her older sister Betsy have never been able to get along, probably because Betsy is motivated by structure whereas Panda takes life as it comes. When Betsy’s “civilian” fiancé Jimmy takes a liking to Panda’s free spirited lifestyle, the long buried friction between the two sisters comes to a boiling head.

“Just 45 Minutes From Broadway” is the fourth play from Henry Jaglom, who’s better known to audiences as the writer/director of the films Festival in Cannes, Eating and most recently, Irene in Time, which also starred Frederick. The stage, of course, leaves more room for a playwright to explore his characters, and I only wish Jaglom would have written a few more lines of dialogue for Panda and Jimmy.

Their sexual tension makes for some interesting exchanges but, at times, seems underdeveloped and abrupt, as if the born filmmaker was behind the editing console of one of his movies. Then again, maybe a film adaptation is in the works.