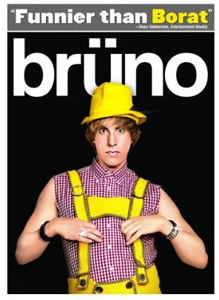 Funny Business: Sacha Baron Cohen follows up the pop culture phenomenon Borat with another reality-invading mockumentary in Brüno. Cohen’s titular character is a gay fashion journalist who attempts to gain fame in America. While it feels more forced than Borat, there are plenty of cringe-inducing laughs. Extras include an hour of deleted scenes.

For the Watchmen completist, Watchmen: The Ultimate Cut brings together all of the various Watchmen spin-off releases, weaving back into the story the animated Tales of the Black Freighter. Included in the extras are Hollis Mason’s tell-all Under the Hood and The Complete Motion Comic, as well as a new commentary track by director Zack Snyder and original artist Dave Gibbons.

From Criterion With Love: Mainly known for his comedies, underappreciated director Michael Ritchie made a string of great films in the 1970s, beginning with his feature debut Downhill Racer. Robert Redford stars as a quietly arrogant and driven downhill skier, going for the gold. Gene Hackman co-stars as his coach. Ritchie’s naturalistic direction allows for plenty of character moments, while the equally beautiful and kinetically inventive cinematography keeps things tense. What makes the film stand out, however, is unlike most sports movies, this film takes a step back, showing fame and glory as fleeting and on a certain level, accidental.

The Idiotbox: After leaving “Late Night with Conan O’Brien,” sidekick Andy Richter starred in a couple of short-lived but innovative and hilarious shows. “Andy Barker, P.I.,” co-created by Conan, is one such show about an accountant who is mistaken for a retired P.I. The first and, unfortunately, only season, co-starring “Arrested Development”’s Tony Hale, is now available.

Before Brian De Palma’s remake starring Kevin Costner, “The Untouchables” was a hit TV show, premiering in 1959, starring Robert Stack of “Unsolved Mysteries” fame as FBI Agent Eliot Ness. The series centered around Ness and his elite squad of agents taking on Al Capone and the Chicago mob in Prohibition-era Chicago. Countless famous names crop up throughout as guest stars, from Lee Marvin to Barbara Stanwyck. Season Three, Volume Two is now available.

The Horror! The Horror! Thora Birch stars in Train, a gore flick picking up where Hostel left off. An American wrestling team competing in Eastern Europe misses its train and boards another. Little do they know they’ve just signed their own death warrants.

Franklyn is an inventive and ambitious sci-fi noir from first-time filmmaker Gerald McMorrow. Set in contemporary London and a visually stunning future world ruled by theocracy, the film follows two parallel mysteries that come together in a fantastic climax.

Made in Japan: The series that launched an anime phenomenon, “Dragon Ball” returns in its second season. Goku sets out to recover the Four Star Dragon Ball with Commander Red and his army hot on his trail.

Based on the arcade game, “Tower of Druaga,” follows a group of adventurers who set out to scale the treacherous tower to battle the titular demon and win the treasured Blue Crystal Rod. Part One is now available.

An asteroid hurtles toward earth, and it’s up to Dragon-riding warriors to save the day in Dragonaut: The Resonance, Part One.

Also Available: Get the story behind the blockbuster in History Channel’s Doomsday 2012; documentary Must Read After My Death; Star Wreck, a Finnish parody of Star Trek