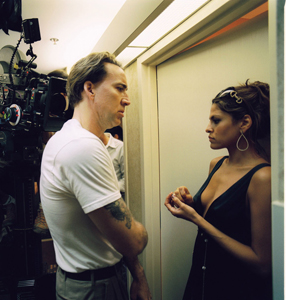 Attempting to launch a film franchise 17 years after the original movie hit screens to tremendous critical acclaim is a very dangerous undertaking, but that’s exactly what Nicolas Cage and director Werner Herzog are attempting to do with Bad Lieutenant: Port of Call New Orleans. The film follows Cage as Terence McDonagh, a police lieutenant whose reluctant heroism during Hurricane Katrina leads to a massive drug problem and steady downward spiral, distantly echoing the plot of 1992’s Bad Lieutenant directed by Abel Ferrara and starring Harvey Keitel in an electrifying tour de force performance.

Upon hearing the news of this purported sequel or remake, Ferrara was quoted as saying “As far as remakes go, … I wish these people all die in Hell. I hope they’re all on the same streetcar, and it blows up.”

In retaliation, at a press conference during the Venice Film Festival, Herzog responded to questions about Ferrara by saying, “I’ve never seen a film by him. I have no idea who he is.”

This war of egos and words seems to still be smoldering. When asked about continuing the Bad Lieutenant saga, Herzog, a stoic, somber German man with a thick accent, immediately bristles.

“Bad Lieutenant was the title of the screenplay [by William Finkelstein],” Herzog begins coolly. “It was the idea of one of the producers to start a franchise. I never liked it and tried to have it made into Port of Call New Orleans but now we have a hybrid. But the question of remake is off the table. People even now speak of the original, which doesn’t happen when people look at Scorsese’s film about Jesus Christ. It’s not the original, and Mel Gibson’s is not the remake.”

Asking Cage to offer a little illumination on stepping into Keitel’s shoes is met almost as unwelcomely. The actor, who recently lost his father and is currently embroiled in a multi-million dollar tax evasion scandal, which he blames on his business manager, conducts his duties with the press through gritted teeth. Literally. His eyes rarely rise off the crisp white linen tablecloth in front of him, and he speaks as if he was battling TMJ or had just had his mouth wired shut.

In response to questions about how it felt playing a corrupt Louisiana cop, Cage mumbles, “I don’t judge him. I don’t think of him as bad or good. He just is. It’s more existential, which is what I think separates it the most from the original film.”

Continuing to rail against comparisons to the original, Herzog jumps in to point out, “I’m not the man to make Rocky 1, 2, 3, 4, 5. I get bored very easily.”

So why make a Bad Lieutenant film if he’s so against the idea of repetition? “Because the character is fascinating enough to place him in other situations,” Herzog replies. “It’s fine to have Jesus Christ 1, 2, 3, 4, 5 or James Bond in a bunch of set ups. I think there’s something valuable about [this character as well].”

Delving into this world allowed both the director and star to snuggle up with dark, subversive humor.

“The more vile and debase the character gets,” Herzog continues, “The more he should enjoy himself. There’s such a thing as the bliss of evil. If you enjoy it, it becomes hilarious.”

And did Cage enjoy getting down with his very baddest self?

“I just felt that I was in the zone,” the actor shrugs. “I came in with a vision. I was thinking about things like Richard the Third. I didn’t need to be pushed or pulled. I just came in and did what I had to do, and I thank Werner for having the guts to let me do it.”

While he’s less than forthcoming about his feelings about the performance or any history that trails his performance, Cage is at his most enthusiastic (on a relative scale) when discussing his director.