The Twilight Saga, New Moon: Are you on Team Jacob or Team Edward? 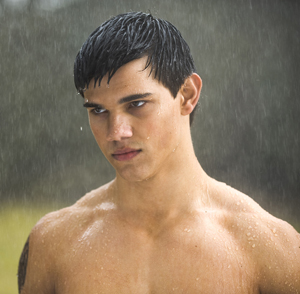 It took just 364 days, a lifetime for most Twi-Hards, a millisecond for anyone involved in the filmmaking process, but the second film in The Twilight Saga, New Moon, is locked, loaded and ready to unspool in theaters across the country. You can almost hear the collective cries of “OMG, OMG, OMG!”

Since their unveiling last year, the cast has grown accustomed to constant scrutiny. That’s what happens when you’re involved in one of the biggest cultural phenomena of the new millennium. But with New Moon, two unlikely heroes have emerged from the massive fame shadow cast by Twilight stars Kristen Stewart and Rob Pattinson: director Chris Weitz and Taylor Lautner, whose role as Jacob Black is greatly expanded.

Weitz was admittedly nervous about taking over the Twilight reins from director Catherine Hardwicke, who helmed the first installment in the series. The only way he knew to combat that anxiety was to be extraordinarily prepared once he arrived on set and to make sure everyone involved understood his level of commitment. In order to bring the cast and crew onto the same page, he began by handing out what Stewart refers to as his “syllabus,” a gesture that still leaves Pattinson in awe.

“I’ve never had that from any director,” the actor begins, running a hand through his famous locks. “It was like 40 [or] 50 pages long. And this is in addition to a bunch of letters, e-mails, everything, trying to show he’s on the same page as us and completely with us in making the film. He is like a saint. I think that shows in the movie. It’s got a lot of heart, especially for a sequel and a franchise.”

“I was the new kid,” Weitz shrugs. “All of the actors knew their characters, but what I really didn’t want was sequel-itis or the idea that we were just cranking out a franchise. I wanted everyone to know what sort of movie we wanted to make.”

Stewart explains that Weitz’s gesture was the ultimate set unifier.

“It was like inviting everyone onto this project and saying, ‘Please, everyone love it, and please, everyone, be invested and work hard.’ It was very encouraging.”

The admiration she had for her director only grew as they spent more time together on set.

Stewart says, “I think to be a good director, you have to be a good person and you have to care about people. I don’t know a more compassionate human being [than Weitz]. He really loves the project as well. He wasn’t just jumping onto the next big thing. He’s incredible. I love him.”

However, production on New Moon didn’t begin with sunshine, puppies and lollipops. Amidst controversy and reported bad blood around Hardwicke’s replacement by Weitz, there was tremendous fan uproar when it was suspected that Taylor Lautner would be swapped for Michael Copon, an actor who was thought to be more believable as the suddenly six-foot, five-inch, muscle bound Jacob described in New Moon.

It was only after intense training and a diet that required him to consume over 3,200 calories a day that Lautner’s position in the franchise was secured, and that’s a blessing because New Moon wouldn’t be the same without him. In fact, Lautner steals the show right out from under his co-stars. If anything, for newly minted Twilight fans, Jacob emerges as the heartthrob, far overshadowing Edward, whose absence is the centerpiece of New Moon, while Lautner’s star is catapulted into the stratosphere.

When asked if he was ever concerned about making Jacob too appealing, Weitz replies, “It’s a balance in terms of how he’s written and how Edward is written. For the die-hard Twilight fans, nothing will ever beat Edward. You’ve got this very strong, simple fact that they know he’s the One, which allows you to push as hard as you can and make Jacob as winning as Taylor has been able to be.”

Lautner is so disarmingly attractive, both physically (He’s shirtless for the majority of the film.) and emotionally, that Bella’s refusal of Jacob in the film seems too obviously born out of loyalty to the book rather than rational. But Lautner defends the series’ love triangle as well as the devoted camps of both Team Jacob and Team Edward.

“It just depends on what kind of girl you are, what kind of guy you like,” Lautner says, offering a gleaming smile that makes him vaguely resemble a younger Matt Damon. “Edward and Jacob are complete opposite guys. They’re hot and cold. Literally. I personally love Bella and Jacob’s relationship, how they begin as best friends and it starts to grow into something more and more. Both guys are in love with Bella. Both guys are always going to be there for Bella and they’re protective. It’s just what kind of guy you like.”

You can decide which team you’re on when The Twilight Saga: New Moon opens.

Interviews
Lily James and Sebastian Stan find a real relationship at the heart of 'Pam & Tommy'
163 views
Interviews
Ricky Gervais knew people would be mad about his new Netflix special. He did it anyway
778 views

Interviews
The star of Oscar-nominated 'Flee' gives his first interview: 'I wanted my story to be seen'
1,154 views

Interviews
'Crazy Rich Asians' made Henry Golding a star. Now he's showing Hollywood everything he can do
846 views