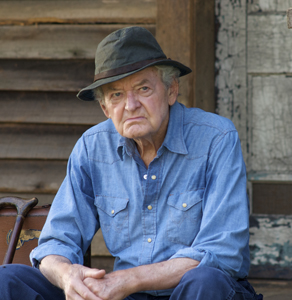 We are taught the circle of life like it’s set in stone. I’m not talking about the fact that we live and then die. There’s not too much possibility for wiggle room there. But with old age come the stigmas: the wheelchairs, the old people smell, knitting, soap operas, prune juice.

Well, my grandma taught me how to knit, and though it’s a lovely pastime, it may not be for everyone. For the adventurous, life isn’t over until it’s over.

Abner Meecham (Academy Award nominee Hal Holbrook) is one of these people who refuses to be forced into complacency so soon. He’s a farmer from Tennessee who has been admitted into an old folks’ home by his lawyer son. Meecham flees the facility and bums a ride back to his country farm to spend the rest of his days in a house full of memories.

To his utter dismay, his son has already leased the farm to Meecham’s old enemy and his family. To spite everyone, the elderly man ruins the family’s wish to live with no hard feelings by moving into the old tenant shack that is located on the property and adjacent to the main house.

His one demand is that his home be returned to him effective immediately. However, his nemesis and new owner of the farm, Lonzo Choat (Ray McKinnon), is not willing to give in that easily.

So the match to be the bigger man with all the power begins. Neither is willing to give in or compromise. The tension between the two men becomes increasingly intolerable. As much as Meecham detests his neighbor, Pamela Choat (Mia Wasikowska) is the daughter who connects most with the old geezer. As all good and bad things do, the standoff between the pair comes to an explosive end.

Based on the short story, I Hate to See That Evening Sun Go Down by acclaimed Southern writer William Gay, the film is a cinematic representation of one man’s attempt to defy nature and evade death like it’s just a matter of finding a better place to hide.

Writer-director Scott Teems has a steady hand and able eye for creating a film that doesn’t belittle Meecham’s search for solace and acceptance of death. Though the pacing lags throughout, there is a somber beauty that highlights the bright side despite oncoming death.