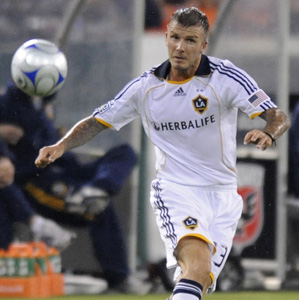 David Beckham and the Galaxy travel to Seattle Sunday to play for the MLS Cup.
(Credit: Chuck Myers/MCT)

The Los Angeles Galaxy advanced to the MLS Cup after a sounding 2-0 victory over the visiting Houston Dynamo Friday at the Home Depot Center in front of a crowd of 25,373.

Los Angeles hosted the match since it finished as the top seed in the Western Conference. Houston was second.

The game could have easily gone either way since it was a hard fought battle that went into two overtime halves after a scoreless 90 minutes.

Head coach Bruce Arena, the MLS Head Coach of the Year, guided the squad into the championship affair. Of course, this also occurred with the leadership of midfielder David Beckham and striker Landon Donovan on the pitch.

“We’ll probably celebrate this for a while,” Arena says. “But there is one more game to win.”

Defender Gregg Berhalter handed the Galaxy a 1-0 edge as he scored off a rebounded ball in 104th minute. Donovan then scored on a penalty kick five minutes later to seal the deal for Los Angeles.

The Galaxy squares off against Real Salt Lake this Sunday, Nov. 22, in the MLS Cup showdown at 5:30 p.m. in Seattle, Wash. It will be televised on ESPN.