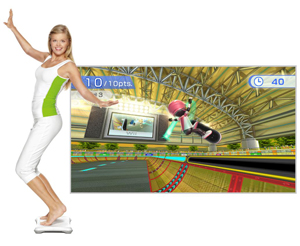 “Wii Fit Plus” pushed the fitness game franchise even further.

While the guts of the system are basically the same as the Nintendo GameCube, the Wii seems to offer more true advances in gaming than any HD video that comes from the other so-called next-gen systems. Whether that potential has truly been realized is a debate that rages on, but the Wii’s simple controls have been used in many creative ways in games across the console.

When the system launched with the then-ridiculous name, it was explained that the system was something that “Wii” could play together. While hardcore gamers may have chuckled at this populist advertising slogan, they were soon blown away by how heavily this system seemed to lean towards games for non-gamers. Even though there are great titles for gamers, the complaint rang out that the system would become nothing more than a novelty once the non-gamers grew bored with jumping around in front of their televisions.

Whether non-gamers have given up on the system or if they continue to see value in the most innovative yet low-tech of the current crop of consoles, the developers have not given up on its potential. The Wii – like the Nintendo DS before it – has found new life by becoming a lifestyle assistant. Thanks to the motion-controlled gameplay and unique peripherals, the Wii offers developers the opportunity to make games that can draw gamers and non-gamers alike further into physical activity than any console before it.

No game franchise embodies this better than the “Wii Fit” series. The original game, with its unique Balance Board peripheral, could weigh and measure players’ balances while they played balance games, performed yoga poses and exercised with an array of stretches. The game kept track of time spent and made sure that the user was reminded to weigh themselves as close to daily as possible, making “Wii Fit” as much of a fitness trainer as it is a fitness tool.

The new “Wii Fit Plus” pushes the franchise even further. Players can now choose from a variety of body improvement-based exercise routines or create full custom yoga and exercise routines that they can access daily, allowing players who need to work out in a short time to jump right into their workout.

The game also offers better tracking, including a cool new feature where you can compare the calories that you have burned with food items that contain the same amount of calories. Gameplay has also been improved with a new crop of balance games that draw heavily from “Wii Sports Resort” and “Brain Age” to emphasize unity between mind and body.

Once they have stretched their legs, players may want to get more aerobic activities that concentrate on arm movement. While it may look a bit young for college-aged players, “We Cheer 2” is actually a fun workout for your arms. By directing the player to swing their arms in wide circles and out in all directions to match the onscreen cheerleaders, this game quickly becomes a high-impact workout that doesn’t feel like a chore.

Ultimately, however, “We Cheer 2” is far more of a game than it is a workout tool. The cheerleading routines are fast-paced to the point that many beginning players and non-gamers may get frustrated at the fast-paced arrows flying in every direction.

Unless they are used to faster motion games, most players will need to watch the routine before they will be able to get through most songs. That said, the nice thing about working out with “We Cheer 2” – as well as all Wii games – is that you can do it in the comfort and safety from watching eyes in your own home.

After all of the exercise, you are going to need something to eat. Rather than just going out to eat, the Wii can help you learn to cook with the new “Food Network: Cook or Be Cooked.” This title was created to act as a virtual cookbook, taking the player through the whole process of making a full meal in real time. This means that, if you do not choose to speed time up, you can spend a full half-hour cooking a complete virtual meal.

While the intention may have been to teach players how to cook, the Food Network people did a good job of making sure that there was still a game hidden in the cooking lessons. Between mini-game events for simpler activities like putting burgers on buns and the larger challenge of finishing all tasks to the judges’ approval, it is more than just an educational tool. These game elements can actually detract from the learning process, but they do a good job of keeping the game interesting. Whether you actually choose to cook afterwards is your choice, but it is a fun way to learn the basics.