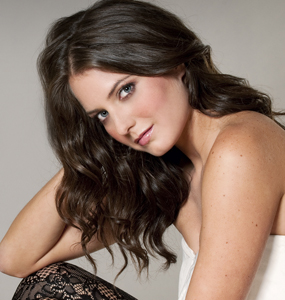 One of the biggest questions a Twi-Hard can ask herself is, “Team Edward or Team Jacob?” This division sprung up from Eclipse (the novel), and the debate is sure to get even more heated once the movie hits theaters.

But, is it more fun to play a vampire or a wolf in New Moon?

Representing the vampires, we have Justine Wachsberger, who plays Gianna.

“Gianna is a human receptionist who works for the Vulturi, which are a group of the most powerful vampires in the [Twilight] books,” says Wachsberger. “What’s interesting about her is that she’s one of the few humans besides Bella who wants to become a vampire.”

OK, fine, so Gianna’s a human, but she works for the vampires. And in economic times like these, how many of us can say that? Plus, ya know, she really, really wants to be a vampire herself. So we’ll go with it.

On set, Wachsberger says that the cast was very welcoming.

“I didn’t really feel a separation between the original cast and the add ones. Obviously, I became closer to the people who were having their first experience on the set. I got closer to most of the Vulturi people, but in general everyone was very nice,” Wachsberger divulges.

But the best part about playing a vampire wannabe?

“There’s an underlying mystery within her,” Wachsberger says. “She kind of crosses that thin line between good and evil. It’s pretty exciting to be on that set and be working with those people and playing that role.”

And on the other side of the fence, there’s Alex Meraz in the role of Paul. Inherently, getting to play a wolf is a little more intense than being a vampire, with some pretty demanding stunt and special effects work.

“They were actually the highlight for me,” says Meraz. “I get to turn into something to do something incredible that I couldn’t normally do in real life, so having special effects that make me turn into a creature like that was really exciting. You know, they make me jump off a 100-foot cliff. Normally, I wouldn’t be able to walk away from something like that, but that’s the beauty of movie magic.”

Meraz also wins points for getting to work with Taylor Lautner as well as Kristen Stewart and Robert Pattinson.

“They’re not pretentious in any way,” Meraz says of the cast. “They’re very down-to-earth. They’re there to work, and it’s inspiring because we’re all fairly young, in terms of the cast. It’s nice to see people that are hungry and willing to do anything to get the job done.”

His character is also part of a very exclusive group: a wolf pack.

“It’s cool, we get to walk around in a six-pack,” he jokes. “It’s fun. I mean, just that name itself I love, ‘The Wolf Pack!’ It’s really exciting, and it’s like a family, even outside of the film. We support each other, we talk to each other, text message. Just to make sure we’re all doing well. It’s really cool when you can bond with your cast mates.”

And it was totally a natural thing.

“It was pretty instantaneous, I mean, we kind of just got it. We met each other and talked about which roles we were playing, and just by the personalities, you could totally tell, ‘Yeah, that person’s Jared, that person’s Sam Uley.’ Everyone thought I was like cocky and pompous, and they were like, ‘Yeah, you’re Paul!’” Meraz laughs.

But Meraz’s favorite part about playing a wolf?

“I get to be tall, dark and handsome!”

So in the end, whether you’d rather be a beautiful, sparkly vampire or a warm-blooded member of the pack is up to you. Now, are you Team Edward or Team Jacob?