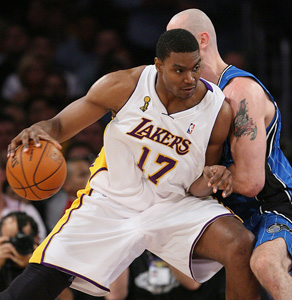 The two top teams in the Pacific Division faced off for the first time this season when the No. 1 Suns brought their league-best record (9-2) to play the No. 2 Lakers (7-3) at Staples Nov. 12. After missing two straight games, center Andrew Bynum returned to the starting lineup and was key to the Lakers’ 121-102 blowout win.

Bynum posted his sixth double-double of the season (tying his season-high 26 points, plus 15 rebounds). He is developing into an all-around stronger player and showing more deftness on defense (averaging 1.88 blocks per game).

The next night was not as easy for the big man or the rest of the squad. They traveled to Denver and were pounded by the 7-3 Nuggets 105-79. Coming off a six-game road trip, the Nuggets held Kobe Bryant to a season-low 19 points (He had zero points in the second half.).

The weekend continued to be a bad one at Staples Sunday, as the Lakers hosted the 6-4 Rockets at Staples. The team shot just 38.1 percent and lost 101-91.

As for Los Angeles’ other NBA team, the 4-7 Clippers finally snagged their first win Nov. 2 against the 1-10 Timberwolves at Staples and managed to tally two more Ws: at Golden State (3-6) Nov. 6 and against the 2-8 Grizzlies at home Nov. 7. However, the Clips suffered three losses in a row thereafter (Nov. 9 against the 3-8 Hornets, Nov. 11 vs. the Thunder and Nov. 13 hosting the 5-5 Raptors).

Sunday, they headed to Oklahoma City and snapped their losing streak with a 101-93 victory over the Thunder. Chris Kaman led the team with 25 points (his fifth 25-points game this season) and seven rebounds, followed by Baron Davis with 24 points six assists and five rebounds.

The Clippers hope to continue the upswing as they travel to Memphis to face the Grizzlies Wednesday, then host Denver Friday and Minnesota (1-10) Monday at Staples.