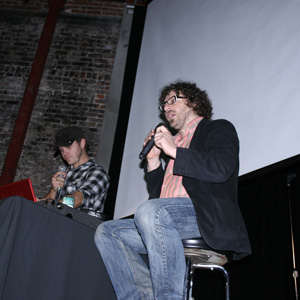 Dubspot, a NYC-based electronic music production institute, took over the King King in Hollywood to drop serious knowledge on Los Angeles’ best and brightest DJs-to-be. The interactive workshop series was split into a Production Day on Saturday and a Performance Day on Sunday, showcasing a wide array of tutorials on the components of electronic music.

The club was packed both days. Students of all ages filled the venue to hear some of the most profound electronic music gurus of our generation. Overflowing with talent, the weekend included lectures by everyone from Peter Kirn, a composer and founder of leading online magazines createdigitalmusic.com and createdigitalmotion.com, to Scientist, a pioneer of dub music.

“Everthing is really cool,” commented Barnardo Attias, a 42-year-old university professor who moonlights as a DJ under his alias DJ Professor Ben. “But listening to Kid Beyond beatbox was kick ass.”

Indeed, it was. Kid Beyond, a Brown University graduate, has made his name performing with an innovative live looping technique where he composes all the layers of a song on stage sans instruments. Using only his voice, Kid Beyond put on the weekend’s highlight performance and demonstrated how he uses his computer to make his music.

Like most of the other lectures, Kid Beyond’s revolved around the use of Ableton’s eighth edition of their powerful music production software, “Live.” With thousands of controls and abilities, the software is not for the faint at heart. Questions, let alone their answers, flew over the heads of the Ableton illiterate.

Beyond the vast technical knowhow of the attendants, what was most impressive was the continuously expanding definition of the word “instrument.” Everything was described as an instrument, from experimental producer Daedelus’ electric grids to Kid Beyond’s “hot hand” – a digital ring with an accelerometer for controlling audio filters during live looping.

Justin Boreta of Glitch Mob had a particularly interesting presentation. With an enormous projection screen showing his laptop display, it was a rare opportunity for the crowd to see what Boreta sees when he’s on stage. For those of you who thought that DJs were just scrolling through an iTunes playlist, Boreta proved you terribly wrong. There is much more involved with becoming a successful electronic music artist than a Pandora account. This definitely isn’t something you learn overnight.

Instead, it’s a way of life – an obsession, if you will. As Daedelus explained, “Music is my addiction. It’s all I think about.”

The crowd seemed to fit that type. Matt Haydon, a young freelance Web developer and graphic designer, attended the event with hopes of furthering his production and performance skills.

“I’ve learned a ton of tips on compression and mastering,” noted Haydon, who also goes by MC Synaesthetic. “I’m less intimidated by ‘Ableton Live’ now and I think with what I’ve learned from this event, I will be able to be successful with my music production.”

The weekend closed with an after-party full of live performances, including Christopher Willits and an iPhone-based audio-visual performance by Aaron McLeran. A thoroughly educational weekend, the conference shed light on the impressive quality and quantity of the brilliant minds that make up the electronic music forefront. The kids are our future, and Dubspot is making sure they know how to work a crowd.