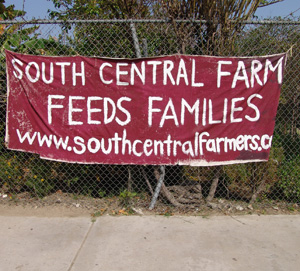 There is a recent renewal of sorts taking place that aims to bring the South Central Farm back into the spotlight, ultimately in order to get it back up and running.

The South Central Farm, a 14-acre space containing 350 family plots, was located at East 41st and South Alameda Streets for 14 years, until being bulldozed in June 2006 to eventually make room for a Forever 21 warehouse and distribution center proposed by developer Ralph Horowitz, who’d sold the land to the City of Los Angeles in 1986 and only in the last decade was able to buy it back after a lawsuit over the land’s intended use. Destruction of the Farm had made news when more than 40 activists, including Daryl Hannah, arrested for tree-sitting, showed up to protest the event and were eventually driven out.

Originally established in 1992, when the L.A. Harbor Department bought the land from the City of Los Angeles, the farm was located across from the Los Angeles Regional Foodbank, intended as a method of giving residents (mostly Latino immigrants) a chance to grow their own food and rely less on the struggling food bank. The farm represented both a safe, neutral place in an area ridden with crime, and a method of providing healthy, organic produce to a neighborhood where such is extremely scarce (refer to Oct. 21’s “South Los Angeles: Running Out of Food?” article).

The South Central Farmers’ Cooperative has since relocated to a certified organic 80-plus-acre farm in Bakersfield and currently sustains itself through community supported agriculture (CSA), selling boxes of assorted produce based on seasonal pickings to consumers whose weekly orders essentially provide mutual support for the farm and food production. One of several pricing options actually permits consumers to order an 11x17x10-inch box of produce for $40, which pays for the produce and is 50 percent tax deductible, this half of the purchase price going toward the South Central Farmers’ Health and Education Fund.

The Fund itself is an effort toward providing low-income, ethnic minority populations with fresh produce in an attempt to battle diet-related conditions like diabetes and cardiovascular disease, utilizing a manner that allows for community self-reliance. But the produce is largely distributed or sold outside of South Los Angeles, at Pasadena Whole Foods and farmers’ markets in parts of the city that are not for lack, defeating the purpose of the original South Central Farm.

When the California Democratic Council jointly held its Grassroots Democratic Convention with the San Diego County Democratic Party on Sept. 26-27 in San Diego, attended by approximately 400 Democratic activists, a resolution was drawn which seeks a revival of the South Central Farm, and is in general support of inner city community farming. The resolution indicates that the proposed Forever 21 warehouse and distribution center which are intended to fill the former Farm space would require an overall 2,581 diesel truck trips per day to the South Central neighborhood.

It points out thusly that, in addition to the increased need for food – specifically, produce – in South Los Angeles, due to the decline of employment and reduction of food bank donations over the recent recession period, for which a farm would be of great help, a revival of the Farm in place of a clothing distribution center would be in the city’s interest as it pertains to city health and quality of life. The resolution’s call for South Central Farm reconstruction is only one of its points, the rest of the document requesting that community farms be built among inner cities across the United States in order to ease the burden of nutritional deficiency related to economic decline.

The resolution has been directed to leaders both large- and small-scale, including Mayor Villaraigosa, City Controller Wendy Greuel and First Lady Michelle Obama, and occurs months after a June press conference at City Hall, in which South Central farmers and their supporters attempted to take back the Farm in a battle with Horowitz. It also comes after a Sept. 1 passing of Ordinance 09-0600-S46 by the City Council, which removed the allowance of Special Event fee waivers for farmers’ markets, and may eventually limit the ability of farmers – such as those in the South Central Farmers’ Cooperative – to continue operating, an added burden beyond the previous destruction of a local farming space.

Local News
L.A. is home to heavy industry— and more federal deals not to prosecute polluters than anywhere else
518 views