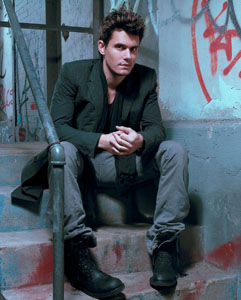 John Mayer gets “concise and from-the-gut” on Battle Studies.

The opening line of John Mayer’s new single, “Who Says,” asks a simple question: “Who says I can’t get stoned?”

In the past three years since his last album release, Mayer has assumed the role as his generation’s premier blues artist. But historically, Mayer’s musical portfolio has existed in a constant state of genre-bending evolution. Even with 12.5 million albums sold and seven Grammy awards under his belt, Mayer is still at war with defining himself.

“Who says I can’t be free, from all the things that I used to be?” the song continues. “Rewrite my history.”

That’s not to say Mayer’s history needs rewriting; Mayer’s musical talent and signature voice garnered attention almost immediately in his career. His debut studio album, Room for Squares, received incredible commercial success, selling over four million copies in the United States alone. It was acoustic, stripped down and honest. The hit single, “Your Body is a Wonderland” earned Mayer a Grammy for Best Male Pop Vocal Performance and the attention of teenage girls everywhere.

Mayer’s sequel, Heavier Things, entrenched him further into the “pop artist” pigeonhole. Debuting at No. 1 on the Billboard 200, the album explored piano loops and a more electric sound. Heavier Things generated Mayer’s best-known song, “Daughters,” resulting in his first No. 1 single and a Grammy for Song of the Year.

But that label seemed to incite a revolution in Mayer’s music. Reaching out to his creative influences, Mayer made a strong shift towards Stevie Ray Vaughan. Following the success of the John Mayer Trio’s live blues album Try! came Mayer’s third studio release, Continuum.

Mayer’s newly defined blues guitar prowess on Continuum received routine praise and further Grammy success. Without completely abandoning his pop appeal, Continuum allowed Mayer to mature to something beyond a pop star. In 2007, Time Magazine placed him on their list of the 100 Most Influential People and Rolling Stone Magazine featured Mayer on the cover of their “Guitar Heroes” issue, and again in the 2008 “Living Guitar Legends” issue.

Yet the idea of branding himself on his past success doesn’t seem to appeal to Mayer.

“But to evolve you have to dismantle, and that means accepting the idea that nothing you’ve created in the past matters anymore, except that it brought you here,” explains Mayer on his Web site. “To pick up your new marching orders.”

This mentality is perhaps why the chapters of the John Mayer novel are somewhat disconnected. Rather than further pursuing the bass-y blues of Continuum, the somewhat experimental Battle Studies revisits the lyrical simplicity of Room for Squares.

“I approach music like a director doing a period piece,” says Mayer. “Where Continuum was R&B and Soul, Battle Studies was written with the timelessness of Tom Petty, Fleetwood Mac and Neil Young in mind. The melodies and message are concise and from-the-gut with the efficiency of simplicity.”

Mayer does take slight risks on the notably edgier “Assassin.” But the crowd-swaying ballad “Friends, Lovers or Nothing” and the pop-country “Half of My Heart” featuring Taylor Swift are bound to gain the most attention.

Although well crafted, it would be naïve to describe Battle Studies as a conclusive depiction of Mayer’s genre. Instead, the album simply proves that Mayer has yet to settle in a skin, if he even has the intention to ever do so. In “War of My Life,” Mayer fittingly sings that he “never liked to label.”

Perhaps to stay relevant, perhaps to find his niche, Mayer constantly changes directions. But considering his incredible musical aptitude, it seems fitting that Mayer defines himself, and his legacy. If getting stoned is what it takes for him to do so, by all means, Johnny, get stoned.