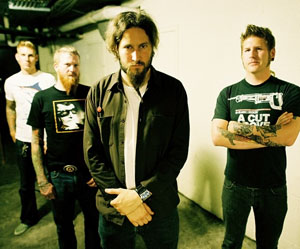 It isn’t easy to classify Mastodon from album to album. In fact, they give David Bowie a run for his money in terms of reinvention. Throughout their decade-long existence, Mastodon have built a theme-related album for all four elements (fire, water, earth and air), and in the process, have defied expectation and genre definition.

As guitarist Bill Kelliher points out, “[The] concepts are getting more and more intentional.”

Each album in their discography moves the band’s unique vision forward. The band’s complex songwriting is coupled with an equally intricate storyline that is awe-inspiring enough to injure more than a few brain cells in order to comprehend it.

Crack the Skye, Mastodon’s fourth and most recent studio release, is based around an out-of-body experience in which a paraplegic man travels through time with the aid of wormholes to stop the assassination of legendary Russian figure Grigori Yefimovich Rasputin.

Skye’s seven tracks take the listener through a surreal journey into an ethereal world of drummer Brann Dailor’s making.

“[Dailor’s] great with storytelling. He puts ideas out there, and we do, too – but with music,” Kelliher says. “I’m not good at lyrics.”

Making the album wasn’t easy. In 2007, Mastodon was riding high on a wave of fame. 2006’s Blood Mountain doubled the first week sales of 2004’s Leviathan and proved the band would not sell out because it jumped ship from an indie label to a major (Warner Bros./Reprise).

A Grammy nomination for their single “Colony of Birchmen” came in February of the same year, but the band ultimately lost to label mates, Slayer. Constant touring that year culminated in the band’s performance at the 2007 MTV Video Music Awards in Las Vegas.

After the performance, guitarist Brent Hinds was involved in an altercation with Shavo Odadjian of System of a Down and another man. Hinds got knocked out with a single blow to the head that resulted in brain hemorrhaging that left him in a coma for three days.

For a month afterwards, Hinds was bedridden, and for another eight months, he had limited mobility due to vertigo. Hinds devoted himself exclusively to writing riffs on his acoustic guitar during this period and wrote much of the music on Crack the Skye.

Their newest release stands out not only because of the new concept, but also because the album features predominantly clean vocals. Bassist and lead vocalist Troy Sanders screamed and pushed his growls to the limit on the previous three outings, but this time takes a back seat and shares vocal duties with all members, except Kelliher, who doesn’t care much for singing.

The vocal melodies shared between Dailor, Hinds and Sanders push the storyline into new boundaries. “Divinations” is perhaps the most complete representation of the band. From its quirky banjo introduction to the catchy chorus (“No escape, binding spirits, no escape, trapped in time space”) and its reverie-like ending that sets up “Quintessence,” the recording is not only headbang-inducing, but it gets the blood rushing even if one is just sitting comfortably listening to the album with a pair of headphones.

Part of Mastodon’s success cannot be found in a typical band’s quest for acceptance among peers, critics, label representatives or fans. It’s firmly rooted in the joy each band member gets from creating music that inspires him. Such a selfish approach to songwriting isn’t new, but it’s unique.

Kelliher jokes that the band measures its success “in dollars,” as opposed to their inclusion in “Guitar Hero,” “Rock Band” or music industry accolades. The members don’t take themselves as seriously as their music might suggest.

“We don’t think too far in advance,” Kelliher says in terms of future concepts.

The band’s mentality is in the now.

“We entice people with our art and packaging. We got to think ahead of the curve,” Kelliher says. “We need to find new and creative ways to market ourselves.”

Mastodon is of the belief that albums should be listened to from the first track to the last. Their old school mentality comes from the days when they would go out and buy a new album and listen to it while reading the liner notes.

Although the band acknowledges times have changed, and as such embraces iTunes as a powerful tool of distribution, Kelliher still wants fans to “take your life off shuffle.”

As Mastodon embarks on a new tour, they set the bar higher than before. In addition to playing old favorites, the band plans to play the album in its entirety.

Kelliher shares, “I pinch myself everyday that I’m in this situation. We’re still here, and we’re still doing it.”

Crack the Skye is currently available. Mastodon will perform Nov. 19 and 20 at the Palladium. For more information, visit mastodonrocks.com.