Thrice: If There’s One Thing They Know… 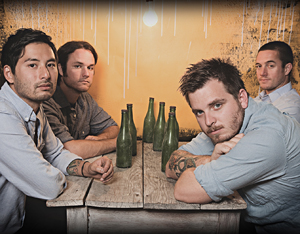 Suffice to say that Thrice has been doing their thing for a long while now. Thus far, the band has seven albums, 11 singles, nine music videos, six EPs, one live DVD and played hundreds of shows over the last decade, all with zero lineup changes. Even more impressive for the Irvine-bred foursome, the magic still hasn’t worn off.

Of course, after completing their four-part epic The Alchemy Index, bassist Eddie Breckenridge, drummer Riley Breckenridge, vocalist Dustin Kensrue and guitarist Teppei Teranishi had their work cut out for them with writing and recording its follow-up. But just as Homer managed to follow The Iliad with The Odyssey, so too have the post-hardcore-turned-prog-rockers managed to return with another masterful work of art like it’s just another day at the office.

With the release of their latest, Beggars, the band took a decidedly different approach and rather than go even bigger and louder than they did on Alchemy, as Teranishi says, “It’s back to basics.”

“This is definitely a culmination of things coming together,” says Eddie, the younger of the two Breckenridges.

Reconciling the four very different styles and approaches the band took with each of the discs on Alchemy, fans can expect to see a straightforward, stripped-down storytelling that’s almost reminiscent of earlier albums The Artist in the Ambulance and The Illusion of Safety, while the band members show off the technical artistry they’ve come to be known for.

“We just wanted everything to feel real, live and raw,” says Teranishi. “I feel like the album is just four guys playing music together, not some big giant thing with five guitar tracks and a synth player; just two guitars, bass and drums – very natural. It feels more honest to me than a big studio production.”

While fast-shredding tracks like “Talking Through Glass” and “The Weight” show off the intricacy of Teranishi’s guitar work, heartwrenching songs like “Wood and Wire” will remind listeners why Kensrue is one of the most skillfully emotive vocalists and lyricists in rock. The new direction, much as it might throw back to older times in the band’s history, will surely have a polarizing effect on fans, but this is nothing out of the ordinary for the members of Thrice.

Having been challenging their listeners to grow with them on each album they’ve released, Breckenridge and Teranishi have learned to take any initial criticism in stride and not lose sight of their own fulfillment in creating music.

“It’s fun for us to play stuff that’s current to what we enjoy. Sometimes we have to dig deep to remember where we were when we wrote ‘Deadbolt’ because we’ve played it eight million times now,” says Breckenridge with a laugh. “We’re so psyched to be playing the new stuff because it feels ‘right now.’”

If there’s one thing to say to Thrice’s credit, they are every bit the mature veterans of a scene that all too often forgets bands as quickly as it pushed them to fame. Whatever other bands are doing now, Thrice has been there and done that a couple times over, but they’ll still be humble about it. With two members who are married and have kids now, that shouldn’t come as a surprise though.

“It definitely gives me a different perspective on touring because now I have a family to provide for,” says Teranishi on the prospect of settling down while being in a touring band. “I feel like a lot of people get into a rut, and living this life where we’re gone for half the year makes me appreciate what I have and makes me appreciate being home.”

Though he’s still happily single, Breckenridge isn’t without his own wisdom to share on growing up in the music industry.

“You’ll always be happier making music that’s true to who you are than trying to pick up what other people like,” he says. “We’re not super successful, but I think our band has somehow managed to do what we feel is right and people respect that. That’s better than anything you could ask for.”

Beggars is currently available. Thrice will perform Nov. 23 at the Avalon, Nov. 24 & 25 at House of Blues Anaheim. For more information, visit thrice.net