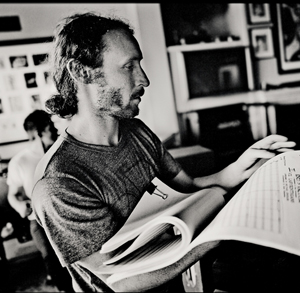 “I gotta tell you, I have a whole different appreciation for college education,” admits Mike Einziger, having just completed a grueling round of midterms.

The guitarist, who started rock band Incubus as a 15-year-old from Calabasas, has checked a new box off his bucket list: student at Harvard University. For diehard fans familiar with the band’s early album S.C.I.E.N.C.E. with song titles like “Nebula” and “Anti-Gravity Love Song,” is it a surprise that Einziger is majoring in both music theory and science?

With the most recent Incubus release, Monuments and Melodies, Einziger took much needed rest from touring after a bout with Carpal Tunnel Syndrome. Yet his creative juices continued to flow, currently writing music for the LA Phil’s West Coast: Left Coast Festival to perform at the Disney Concert Hall Nov. 21 – all furiously written between midterms and final exams, of course.

You decided to go back to school to get your college degree. How did this come about?

Being on tour, you have a lot of time to read books and mosey around the Internet, contrary to what people think. I came across the work of Kenneth Miller, an author, educator and professor at Brown University whose specialties are Biology and Evolutionary Biology. I was interested in those things, so I wrote him an e-mail, and we started talking.

Around the same time, I had a really good friend of mine studying neuroscience at Harvard. We sort of concocted this scheme where I would come to Harvard to visit her, then travel to Brown together and interview Dr. Miller. It would be like a really cool educational trip for me. Through that, I fell in love with Harvard. That was the beginning of my love affair with the school.

What’s the theme behind the West Coast: Left Coast Festival?

It’s a celebration of California, or West Coast musicians and composers. I have a personal and profound appreciation for all of the artists who are performing, so it’s definitely a monumental thing for me.

To share a concert bill with the Kronos Quartet, Matmos and Terry Riley; these are all artists who have had a big influence on me in different ways. It’s a bit overwhelming. To be honest, I’d much rather be going to the concert than having a piece performed at it. It’s completely scary.

How would you describe the music you’re writing for the festival?

I don’t really know what it will sound like, but it’s all sort of based on this preoccupation with wave. One of the salient points in quantum physics is that anything solid has a wavelike property to it.

Since this is a celebration at the Disney Hall, I thought it would be fitting to write a piece inspired by the shape of the hall itself. It looks like frozen waves of matter to me; it’s mesmerizing. The piece is called, “Forced Curvature of Reflective Surfaces.”

What do you see as the next creative path for Incubus?

I really have no idea. That’s sort of the beauty of writing and being excited about music, the uncertainty that it fosters. Music is a big place; it’s the biggest place that’s ever existed. There’s so much room to wander around and explore in it.

That’s how I feel about this process: I’m just finding new rooms in a place where I already live. Studying classical music, I’m not trying to bring the world of classical music to Incubus; it’s not a goal of mine. This is all really for the love of music.

Your major is music theory and composition with continued studies in human evolution biology. What do you plan to do with this knowledge?

I honestly don’t have a plan on what I’m going to do! All I know is that I love being a student, I love learning and I love being in class. It’s actually nice to go from a situation where you’re up on a stage and all these people are screaming at you and telling you that you’re amazing, to being just another dumbshit who’s trying to keep up with all the other [students]. It’s really humbling.