A Bright and Guilty Place 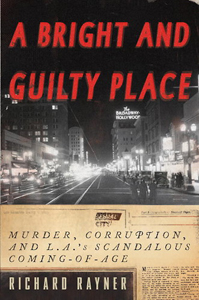 In the 1920s, Los Angeles became America’s unofficial land of opportunity, thanks to the city’s rich oil fields and burgeoning movie industry. Richard Rayner’s A Bright and Guilty Place, however, paints a rather morose portrait of its boom years.

Rayner argues that prohibition era Los Angeles, rampant with scandal and corruption, came of age during the ’20s, subsequently giving birth to the noir genre seen in films like Billy Wilder’s Double Indemnity and the pulp novels of Raymond Chandler. To prove his thesis, Rayner chronicles the lives of former L.A. District Attorney Dave Clark and LAPD crime investigator Leslie White, two hard-nosed Angelenos that were, as Chandler might put it, in the thick of it all.

The two men’s lives dovetailed several times throughout their careers, and brought them amidst some of the biggest trials of the decade, including those of oil magnate E.L. Doheny and silent movie star Clara Bow. Rayner’s reporter-like thoroughness tends to weigh the material down at times, and his enlightening personal note on how his love affair with Los Angeles began during the Rodney King riots proves to be far more interesting material. Maybe he should have written a memoir instead.

A Bright and Guilty Place is currently available.