Directors Should Cut Their Own Trailers 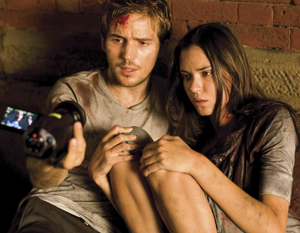 Cloverfield had an awesome trailer.
(Credit: Courtesy of Paramount Pictures)

OK, gripe time. As I hope my audience knows, when I have a bone to pick it’s because I want things to get better. In an attempt to be part of the solution and not the problem, I like to provide my own possible solutions.

The other day I watched the first trailer online for a film I’ve been very excited to see. I’m not going to give specifics, but everything about the concept, story, characters, actors and filmmakers are all the things I generally gravitate toward in my taste in film.

On top of that, all the buzz on the project has been great, and all the early reviews from people who have been to test screenings have been very positive. So you could imagine my reaction when I watched the first trailer and was disappointed.

If I hadn’t been tracking the progress of the film and this trailer was the first I had seen of it, I wouldn’t be excited about it. It’s funny how a film and its trailer can literally be night and day opposites. Films are slaves to marketing, and the trailers that are made and put out these days are just awful.

These days trailers either walk you through every major beat of the story and spoil all the mystique of the film, purposefully miscommunicate the vibe of the film out of fear that people won’t see it if they know what it’s really about or the trailer feels as if it’s trying too hard like an older person who’s completely out of touch with the youth who talks to kids like, “Hey dude, what’s happening, yo?”

I’m not saying that 100 percent of all the trailers are bad, but most of them don’t get me excited about the film. A few weeks ago I watched about 50 movie trailers in a row on iTunes, and I think maybe two made me moderately interested. What sucks is that most of the actual films are probably really great but are hampered by uninspiring trailers.

We’re at a point where we consume films like fast food, and we’re bombarded with so much advertising that it behooves the marketing people to explore fresh and creative ways to get people interested in the films. It’s common knowledge that the filmmakers rarely, if ever, have any involvement in the marketing of their films, but my question is: why not? Why not let the person who made the film figure out the best way to tease it to people?

So here’s my proposition: Let the director of the film cut his own trailer, then test it against the trailer from the marketing division, and whichever trailer tests higher with the test audiences gets released. Bring in six test audiences, test the director’s trailer first and then the marketers’ trailer second for three of the groups, then switch it around for the next three, and then have the people vote when they come out of the theater.

It’ll probably take no longer than 15 minutes for each screening and won’t cost anything to do. It’s a win-win situation and works entirely for the benefit of the film and everyone involved.

Right here, right now I’m willing to bet that if studios started doing this, the trailers cut by the directors would test better more than 50 percent of the time. This is what filmmakers do; they make films. Essentially, a movie trailer is a short film. If you look at it from that perspective, if given the task to write, direct and edit a short film, how many marketing people do you think would make an awesome short film compared to an accomplished filmmaker? I’m not even going to answer that.