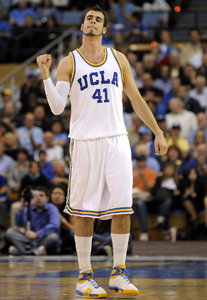 College basketball has returned. The thrills, upsets and joys are soon to arrive, and the madness will be here in no time come March.

Both UCLA and USC basketball programs (men and women) are looking to battle their way into the NCAA Tournaments, but a long and difficult season lies ahead since they contend in the always-tough Pac-10 Conference.

The Bruins men’s basketball squad is coming off of a rather successful 2008-09 campaign in which they registered a 26-9 overall record and 13-5 in conference play. UCLA finished in second place of the conference standings, right behind Washington.

The Bruins, who finished at No. 18 at the end of last season, had two players that placed in the All-Pac-10 Team: senior guards Darren Collison and Josh Shipp (second team). Both athletes are no longer with the team, however, and UCLA’s squad is now rather young.

Head coach Ben Howland is set to guide the unit for the seventh consecutive season. Evidently, he is aiming to capture another Pac-10 Conference Tournament title.

In late October, the program was selected to finish third overall among the 10 schools in the conference standings as the season ends. California (first) and Washington (second) were chosen ahead of UCLA. In this preseason poll, the Bruins attained five first-place votes, as they accumulated a total of 292 points.

There are six prominent contests on the Bruins’ schedule; starting with the Pac-10/Big 12 Hardwood Series game in which UCLA hosts Kansas Dec. 6 at Pauley Pavilion. UCLA then travels to Indiana to face Notre Dame Dec. 19. The other four-standout games are those against California and Washington.

How will the Bruins play against these conference foes, especially on the road? It will be interesting to see what happens once conference play opens.

The Bruin women are coming off a season that saw them place fourth in the Pac-10 standings after collecting a 19-12 overall record and 9-9 in conference action. Only guard Doreena Campbell received Pac-10 honors last season after being selected for the All-Pac-10 Second Team. Campbell is now a junior and is the leader of the squad on the courts. She averaged 12.9 points per game and is a force to be reckoned with.

Another upcoming crucial asset to the Bruins is sophomore guard/forward Atonye Nyingifa. She was on the All-Pac-10 Freshman Team; this honor is given to those who show signs of a bright future in the conference.

UCLA was selected to finish in fourth place yet again for this coming season. The program received 63 points, one behind Arizona State, four off California and 18 from Stanford, a team that is looking stronger than ever.

The Trojan men, who finished ranked 27th last year nationally, come off a busy break that saw Tim Floyd resign from the head coach position. In early June, Kevin O’Neill was named the next head coach of the program and, with his previous experience, is sure to establish himself as a solid leader in the coming years.

In junior forward Taj Gibson, the Trojans lost their best asset on the floor. Gibson received the All-Pac-10 Second Team Honors on top of being named the Pac-10 Defensive Player of the Year. USC also lost the services of junior guard Daniel Hackett, who was on the All-Pac-10 Second Team as well. The Trojans finished in fifth place in the conference last season after going 22-13 overall and 9-9 in the Pac-10; they went on to make the NCAA Tournament.

As far as this season is concerned, USC was chosen to finish ninth in the Pac-10 standings with a total of 109 points. Stanford was last with 63 points. Arizona, Oregon State, Oregon, Arizona State and Washington State were selected above the Trojans in the preseason poll, respectively.

Every game figures to be a tough one for the Trojans, but none more than the affair at Texas (Dec. 3). Other key games are those against UCLA, Arizona, California, Washington and Tennessee.

The women of USC have an exciting season ahead of them, especially with their new head coach Michael Cooper, who formerly coached the Los Angeles Sparks and played for the Los Angeles Lakers.

“I’m very honored to have this opportunity to coach at a great university with such a rich tradition in women’s basketball. My philosophy has always been about winning championships, and at USC, we want to do that as well as graduate our players and make sure they enjoy their basketball experience. I’m looking forward to working in a collegiate atmosphere and all that comes with it,” Cooper said to USC’s Sports Information crew.

This season, the Trojans were chosen to finish in fifth place of the Pac-10 standings; they amounted 48 points and placed above Washington State, Oregon State, Oregon, Arizona and Washington, respectively. USC finished tied for fourth place last year in the conference, registering a 17-15 overall mark and going 9-9 in conference.

Sophomore Briana Gilbreath leads the team this year. Gilbreath received numerous accolades in her freshman campaign, as she was on the All-Pac-10 Third Team, Pac-10 All-Freshman Team and the Pac-10 Defensive Honorable Mention. And, she also was the 2009 Pac-10 Freshman of the Year.