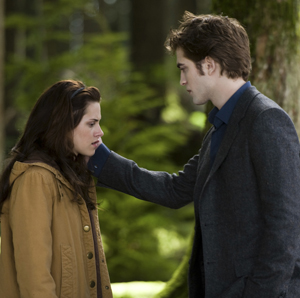 Two down, one in post-production and one to go. And with New Moon’s pending release (I’m sure all of the Twi-Hards have had countdown timers running since Twilight hit theaters.), everyone is waiting with baited breath to see whether Chris Weitz will either pull off or butcher the second movie.

In the first movie, Catherine Hardwicke left in the iconic lines that made Twilight (the novel) so instantly memorable, but the acting was so over the top that the overall film felt cheesy and clichéd despite Kristen Stewart and Robert Pattinson’s (apparently very real) chemistry.

The inherent problem with New Moon is that Stephenie Meyer wrote herself into a corner with most of the middle part of the novel. Now, I’m not saying that any of the books are exactly high art, but the remaining installments of The Twilight Saga should be especially hard to adapt into film.

All of the middle of New Moon was S-L-O-W and bogged down in the terrible emo-ness and insecurities that were Bella not getting a life. Oh, and there was no Edward. Sure, I know that it was about setting up Jacob’s irrational love for Bella, but what am I supposed to do without my Edward?!

I get what Meyer was trying to do for the overall arc of the Saga, but seriously, this part was hard to get through. Really, this book didn’t need to be 563 pages long. I’ll admit that I read every one of those pages (in like a day and a half), but I ended up with a headache from all the emo.

Of course, this is actually a boon to the film, since we can compress the whole thing and eliminate some of the more frustrating parts. But if Weitz only gives us the highlights from this period, the whole thing will just end up feeling contrived.

To keep up with a mid 2010 release date, Eclipse was directed by David Slade. It certainly won’t be easy to compress 629 pages into a filmable movie, a task especially daunting because the novel was jam-packed full of details and plot points.

With Bella splitting her time between the Quileutes and the Cullens and trying to turn everyone into one big, happy family, plus finding out more about the secrets both camps are keeping, Slade really had his work cut out for him. Oh, and there’s also Bella and Edward’s engagement, Jacob trying to stop it and the return of Victoria (not played by Rachelle Lefevre). Yeah.

But the real problem of the novel is definitely going to be Breaking Dawn. There’s been no word on production apart from an estimated 2011 release date, but I would like to think that’s just the production company being optimistic. The novel is so rife with problems that I’m really not even sure how Meyer got it published in its “finished” form.

That should be where the record scratches. For everyone. Really, this cannot possibly be filmed. And the real catch is that this literal case of cradle robbing not only creates maximum drama, it also cements the bond between the wolves and the vampires. And it can’t happen when little Nessie grows up, since everyone knows that wolf imprinting doesn’t just develop, it strikes like lighting. On the whole, Nessie feels like an overly convenient (and unimaginative) plot point, but as written, the novel cannot work without it.

But the biggest cop out here is the ending. You expect a down and dirty battle of the vampires, but all you get is talk. Of course, this shouldn’t be hard to remedy. After all, Melissa Rosenberg (who wrote the screenplay for the first three films) has written for both “The O.C.” and “Dexter,” so between the two of those, she should be all set.

The only thing left to really wonder about is the director. But that’s a whole ’nother article.