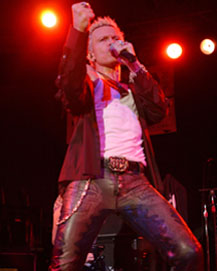 Even aging golden gods get tired of the same old same old. If so, Robert Plant, former lead singer of Led Zeppelin, was in the right place.

Plant kicked off the 19th annual gathering of the music tribes at the South by Southwest Music Conference by confessing that he had once made a pledge-drive contribution to a public-radio station in Portland when it promised not to play Zeppelin warhorse “Stairway to Heaven.”

“It’s not that I don’t like it,” he said during the conference’s keynote address, “it’s just that I’ve heard it before.”

That was as good a way as any to explain the ridiculously long lines that greeted much ballyhooed performances by newcomers such as exotic rapper MIA, British rockers the Kaiser Chiefs and Bloc Party, bubble gum brats the Go! Team and San Diego’s first contribution to glam, Louis XIV.

Though South by Southwest had its share of still-vital pros priming the pump for new or relatively recent albums – including Plant, Elvis Costello, Mavis Staples, even the reconstituted New York Dolls – this was all about introductions that might lead to someplace big. Or not. The mind flashes back to buzz bands of South by Southwest’s past: Remember Paw? Clinic? The Von Bondies? Thought not.

This year, it was most definitely MIA’s turn in the show-and-prove hot seat. Her debut album, Arular, isn’t even out yet, but the exotic Sri Lanka-by-way-of-London immigrant already has been the subject of more cover stories, photo spreads and record-company machinations than most of the 1,200 other bands at the conference combined.

Arular explores a bold new brand of world-music, with Brazilian funk, South Asian bhangra, reggae and grime (London’s answer to hip-hop) underpinning Maya Arulpragasam’s ping-ponging schoolyard rhymes and party-starting protest songs. On stage, MIA came off as playful but slight, fun and energetic but one-dimensional. She’s clearly in need of more seasoning as a live performer, even if Arular already is destined to become one of the year’s most talked-about debuts.

With Bloc Party, Go! Team, the Kaiser Chiefs and Louis XIV, individual songs burst into instant rotation in the radio station of the mind. The Chiefs’ “I Predict a Riot” in particular seemed to be everywhere. But far more impressive was LCD Soundsystem, in which indie-dance producer James Murphy emerged from his recording studio to lead a five-piece electro-rock band. A devastating cover of Nilsson’s “Jump into the Fire” topped off a mix of dive-bombing bass, machine-gunning drums and even a few well-timed cowbell solos on instant anthems “Daft Punk Is Playing at My House” and “Losing My Edge.” Murphy proved that he’s more than just the mixing-board guru behind hits by the Rapture and the DFA Records stable. He also knows how to make the disco-punk audacity translate on the stage.

Other notable moments from five days and nights at SXSW:

One-man bands: If hip-hop has a Tom Waits-like Beat poet in its ranks, it just might be Buck 65. The rapper was a one-man tour de force of turntable scratching, surreal rhyming and confetti-tossing theatricality. Then there was Jackie Greene, a biracial multi-instrumentalist with a harmonica rack, who mixed blues harp, boogie-woogie piano riffs and ebbing-and-surging post-Dylan folk narratives with an assurance that belied his boyish, 24-year-old features.

Best Joe Pesci look-alike: Give it up for the tiniest surviving Doll, Syl Sylvain. With David Johansen still looking like trouble with his equine brashness and lion-hearted voice, the surviving New York Dolls invested “Personality Crisis” and “Jet Boy” with a fresh shot of Lower East Side brio.

Heavyweight fringe: Head-bangers had plenty of moments to make like Godzilla rolling through Tokyo in Isis’ set, but the quintet’s gift is to find the introspective sweet spots amid the sonic oppression.

Singer-guitarist Aaron Turner turns metal inward, exploring an interior universe that sounds as vast as the Grand Canyon at sunset. In a similar vein were the slow-build epics of Japan’s Mono, and the intricate layering executed by Chicago’s increasingly impressive Pelican.

Lost in space: In the town that virtually invented psychedelic rock in the ’60s with Roky Erickson’s 13th Floor Elevators, Oakland’s Gris Gris brought a little holy fire of its own. The quartet tunneled into space with mallets thundering, Vox organ droning, clarinet blaring and boyish Greg Ashley howling like a young Erickson from the bottom of a deep, dark well.

iPod, shmie-pod: Mastering engineer supreme Howie Weinberg lamented the sonic quality of MP3 files played on Apple’s portable music players. “It sounds like crap,” he proclaimed. But in the war of fidelity versus convenience, top-line producers and engineers agreed, convenience is winning, signaling the demise of top-flight recording studios.

Free and thriving: Sandy Pearlman, ace producer (Clash, Dictators) and digital-era gadfly, said 25 billion free music files are shared annually, dwarfing the amount of music distributed via CD sales and payable downloads. His solution: Create a music-specialized search engine to help consumers find the songs and albums they want easily, then charge them 5 cents per download. If gridlock regarding issues such as digital copyright persists, Pearlman and others warned, there won’t be an industry left to save.