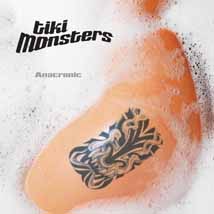 Tiki Monsters sound like a lo-fi garage version of the Los Lonely Boys. The vocals on each track are dry and edgy, to emphasize the grit of the lead guitar.

They have a wide range of tracks, including the soft rock ballad “Wander” and the lyrically strong “All My Fault.” There is also the funk-infused “Movie Star” and dis-torted, adrenaline pumping “Smash It.” These are the closest to danceable tracks the album gets.

All the songs were written by lead vocalist/guitarist Andrew Light, and Anacronic can be interpreted as a story about a tortured man trying to find himself and the women he is ceaselessly plagued by. Yet, there is still a balance between Light’s attempt to be both insightful and sexually driven.

Tiki Monsters are new to the scene and definitely have room to grow, but their effort on their debut album does not go unnoticed.