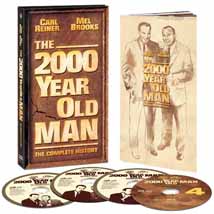 This box set contains all five comedy albums from Mel Brooks and Carl Reiner. The premise is simple: a man who claims to be 2,000 years old (Brooks) comes to America where Reiner interviews him about his life. Brooks, however, has the personality of someone’s Jewish grandfather. The sketch became one of the benchmarks of American comedy in the last half century.

Also included is a DVD with a new interview with Reiner and Brooks, the duo’s appearance on “The Ed Sullivan Show,” the animated short adaptation and more.