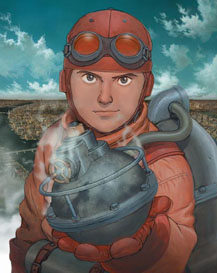 Why they didn’t just call this film AtomicBoy I don’t know. As with many animes, Steamboy is an allegory for the dropping of Little Boy on Hiroshima. But unlike many animes, this one is so transparent in its source material that one wonders why filmmaker Katsuhiro Ôtomo (Akira) just didn’t film that.

None – well, perhaps one – of the characters are Asian, and the entire film is set in the UK in the middle of the 19th century in the days surrounding the World Expo where the “Steam Ball” will be revealed (or, to some, “unleashed”) on humanity. Because, you see, like the splitting of the atom, the Steam Ball is the source of unbelievable power.

Steamboy (Rei, a young inventor) wants it to be used to aid humanity, but nefarious British and American imperialists want to harness its power for destructive means. There are even multiple epiphany scenes where the characters actually discuss what science is for.

“What is science for” drives this story, with the characters being less human than the steam machines they build, mere vessels of a variation on the theme. When I want to read an essay, I’ll read an essay and when I want to care about characters, I’ll see a movie – ideally. While, as with all of Ôtomo’s films, the visuals are worth the price of admission, the didactic dialogue and bombastic theme is nothing we haven’t seen before.