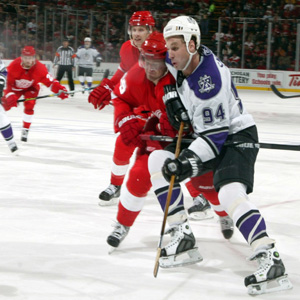 The Kings’ Ryan Smyth will be out for a few weeks due to an upper body injury.
(Credit: Julian H. Gonzalez/Detroit Free Press/MCT)

It was bad enough that the Kings lost two of their last three games and five of the last eight, but now Los Angeles will be without Ryan Smyth, the team’s second leading scorer, for at least a month. The first-year King suffered an unspecified upper body injury.

Smyth, a 33-year-old Canadian Olympic team hopeful, scored nine goals and had 14 assists (23 points) in 22 games this season, combining with Kopitar and Williams to create one of the league’s most promising front lines. Both Smyth and Kopitar have been the Kings’ top performers in nine of the team’s 24 games this season.

Kings head coach Terry Murray told several media outlets that Smyth’s injury will be the team’s first true test of adversity this season, which was off to a promising start. At 13-9-2 (28 points), the Kings are currently in second place in the Pacific Division and would own the fifth seed if the Western Conference playoffs had started today.

However, the Kings were beginning to struggle just before Smyth’s injury, with opponents outscoring them 28-17 in the last eight games since Nov. 7; the Kings killed just 21 of 29 power plays in that stretch.

Down south, the Anaheim Ducks (7-11-3, 17 points) have been struggling all season, residing in the Western Conference cellar and posting two four-game losing streaks through 21 games. Hurting the Ducks is their penalty killing; at 74.3 percent, only Florida (74.1 percent) and Toronto (73.6 percent) squash penalties at a worst rate than Anaheim.

Of course, Anaheim has been riddled with injuries all season, including recent games missed by Saku Koivu, Steve Eminger and, possibly, Joffrey Lupul. If the Ducks will ever be at full-strength, perhaps then they will be able to play to expectations.