“How the Grinch Stole Christmas! The Musical”: Now-Jan. 3 @ Pantages Theatre 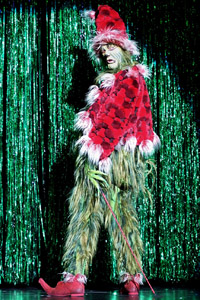 From the brilliant mind of Dr. Seuss comes a musical version of “How the Grinch Stole Christmas,” the tale of a bitter, cave-dwelling Grinch who decides to steal Christmas from Whoville, a town populated by warmhearted, Yuletide cheery Whos.

Starring Nickelodeon star Stefán Karl as a capable and charming big green Grinch, and featuring John Larroquette as the Grinch’s loyal dog Max, with costumes that seem to be spun from candy canes and sets that faithfully recall Dr. Seuss’ magic, the music, sadly, is the weakest part. Rather than rousing, it feels stiff, antiquated and, occasionally, hymnal-esque, with the exception of “You’re A Mean One Mr. Grinch,” a song that wasn’t written for the show. Brush up on that one before you go; that way you’ll be prepared for mid-show Grinch karaoke.