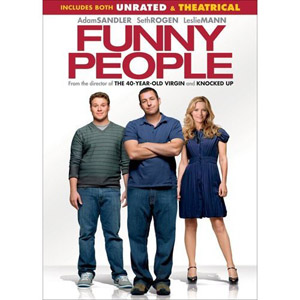 Funny Business: With the comedic empire Judd Apatow has built it’s hard to believe Funny People is only the third film he’s directed. The dramedy follows a famous comedian played by Adam Sandler, who, after being diagnosed with a terminal disease, takes a rookie (Seth Rogen) under his wing. Jason Schwartzman and the unlikely Eric Bana join Apatow regulars Jonah Hill and Leslie Mann. Just don’t go in expecting nonstop yuks. There’s actually a good deal of serious stuff here, too. Now if only someone would tell Apatow to cut a half hour from all of his films…

Gerard Butler and Katherine Heigl star in the battle of the sexes comedy The Ugly Truth.

The Collector: British comedian Steve Coogan finally broke through with U.S. audiences in Hamlet 2, but he’s been a TV superstar across the pond for many years. In shows such as “I’m Alan Partridge” and “Knowing Me Knowing You” he’s proven himself a master of uncomfortable comedy on par with Ricky Gervais. The Steve Coogan Collection includes all of his BBC work, including some previously unreleased gems.

The entire run of the modern TV cult classic “Farscape” comes to DVD in one megaset. An astronaut on an experimental mission is accidentally hurtled across space to a far off part of the universe. Suddenly, he finds himself in the middle of an alien conflict, a part of a crew of fugitive aliens.

The original British version of “Life on Mars” comes to a stunning close with Series Two. The series turns the cop show on its head, when a modern day detective hit by a drunk driver wakes up in 1973. Is he a time traveler or delusional? Now he must use modern day policing techniques to solve crimes and attempt to get back home.

Foreign Fare: Turkish director Nuri Bilge (Climates) won the Best Director award at Cannes for Three Monkeys, a tragic neo-noir. An ambitious politician pays off his chauffeur to take the rap for a hit and run. When the chauffeur is released he finds his life has fallen apart, with his wife carrying on an affair with the politician. It’s a stark and moody psychological piece of work.

Also available: Thirst (from the director of Oldboy), Toi & Moi

It’s hard to believe it’s been 10 years since the Chuck Palahniuk adaptation Fight Club was released. The Anniversary Edition Blu-ray is a monumental release, which includes tons of special features and a surprise specially designed by director David Fincher. The hi-def format is perfect for Fincher’s meticulous visual style and the uber hip Dust Brothers soundtrack.