Me and Orson Welles: Zac Efron Lucks into the Role of a Lifetime 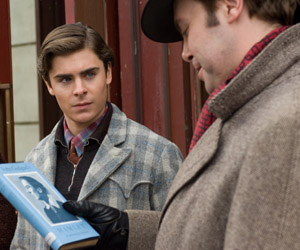 Zac Efron as Richard Samuels and Christian McKay as Orson Welles in Me and Orson Welles
(Credit: Liam Daniel)

Shakespeare taught us that “Cowards die many times before their actual deaths.” Richard Linklater is anything but a coward.

The visionary, rule-less, genre-less director created the definitive Generation X film Slacker before moving on to one of the best high school films of all time, Dazed and Confused, and has since created heartbreakingly tangible love stories (Before Sunrise/Before Sunset), tent pole comedies (The School of Rock) and introduced a rotoscoping animation technique (Waking Life, A Scanner Darkly) venerated and studied by audiences, scholars and filmmakers alike. But his latest film, Me and Orson Welles, is an exercise in simplicity; just beautiful costumes, period sets, great actors and a charming script.

Based on Robert Kaplow’s painstakingly researched novel, the film unravels the week in 1937 New York that led up to the opening night of Orson Welles’ seminal production of “Julius Caesar” at the newly-founded Mercury Theater. Witnessed through the eyes of Richard (Zac Efron), the movie shows Welles (played with virtuosity by Brit Christian McKay) in his prime when, as Linklater says, “Everything he touched turned to gold.”

“It was a book I was incredibly charmed by,” Linklater explains, “the best kind of historical fiction. I loved that it was a meticulous recreation of that moment in time.”

The director optioned the book with his own money and soon had a completed script, but the film hinged on one element: casting someone to play Orson Welles. Linklater says he was adamant that his film “do Welles justice,” and the only way to do that was to unearth the perfect actor.

As luck would have it, McKay happened to be performing a one-man show about Welles in a small 49-seat theater in Manhattan just as the final draft of the script came together. The moment Linklater saw McKay’s performance, he knew he’d found his lead.

“Once Christian was onboard I felt like the planets are aligning, the film gods are with us, they’ve presented Orson,” Linklater beams. “The magic was that [Christian] was an unknown and the audience could see him and think, ‘Wow, I’m hanging out with Orson.’”

Next Linklater needed to find an actor who could portray a driven youth with innocence and gumption, one who lands a part in Welles’ production through sheer tenacity and timing. It was a part Efron instantly connected with.

“I can definitely relate to [my character],” Efron nods. “He lucked into this part and gets taken on a whirlwind adventure, and that’s how I started. I think essentially what my character Richard does is do everything that I did over a period of five years, [but] he did it in one week and was much cooler,” Efron laughs.

Efron was thrilled to be involved in a project that investigates a pivotal time in the life of one of acting’s deities, a man both revered and reviled, seen not as he’s remembered now; fat, angry and aged, but in the prime of his life.

“You go on this adventure of a week in Welles’ life when he’s in his prime; this portion of his life when he’s 22 and revolutionizing Broadway and virtually every form of media at the time. It was a glorious moment. He was so brilliant,” says Efron.

Linklater wasn’t familiar with the cult of Efron’s High School Musical fame when he agreed to meet with the young actor about the role. He hadn’t seen those movies and still hasn’t. What Linklater wanted to find was the best actor he could.

“It’s a really demanding part,” Linklater says. “If you put a softer actor, someone who doesn’t have Zac’s leading man personality, looks, charisma, all that, think about, he has to go toe-to-toe with one of the biggest personalities of the 20th century. That guy could’ve gotten blown off the stage. But Zac is formidable in his own right. He’s really smart and really works hard. I was so impressed with him. I can’t wait to see the next 10 to 15 years of his career. I think he could do anything.”

Me and Orson Welles releases in select theaters Nov. 25.